When a million-seller rock singer breaks away from his usual band and hires instead a bunch of hot-shot American jazz musicians, what is he trying to prove, and to whom?

It is a tribute to Sting's ability to ingratiate himself with most of the rock audience most of the time that his motives in ditching the other two members of The Police in favour of the aforementioned jazzmen have hardly been questioned. Whether he is attempting to show himself to be worthy of higher things or genuinely trying to bring the talents of others to wider attention, the real surprise of his current tour is that, musically speaking, there are so few surprises.

Naturally enough, last night's concert was largely devoted to the songs from 'The Dream of the Blue Turtles', the album for which Sting assembled his allstar line-up of Branford Marsalis (saxophones), Kenny Kirkland (keyboards), Darryl Jones (bass guitar) and Omar Hakim (drums) - all stars, that is, to those who pay close attention to the activities of Miles Davis, Weather Report and Wynton Marsalis, with whom these men made their reputations.

The band stuck closely to the scripts of such set pieces as 'Russians', 'Children's Crusade' and 'We Work the Black Seam'.

It was a particular pleasure to hear Marsalis turn again to the alto saxophone, an instrument he has neglected since his tenure with Art Blakey's Jazz Messengers a few years ago, on the finger-popping hipster's groove of 'Consider Me Gone'. His soprano saxophone accompaniment to 'Roxanne', a repeat of one of the Live Aid concert's most magical moments, was another highlight.

Kirkland's rollicking piano solo, a mixture of funky block chords and wild Latin inventions, gave a climax to a medley of two more Police songs, 'Bring on the Night' and 'When the World is Running Down', in which Sting's guitar work showed him to be capable of a fair pastiche of his erstwhile colleague Andy Summers's cunning manipulation of tone colour.

Despite the audience's general enjoyment, though, something was not quite right. Jones's dull bass solo, Hakim's cynical drum extravaganza, an arrangement of 'Every Breath You Take' that went on just too long, several passags of soggy jamming, the way the spotling followed Sting ven during the other musicians' solos - these little things somehow took the edge off the evening's joy.

(c) The Times by Richard Williams
Comments
0
You must be a logged-in member to add comments. Log In | Subscribe 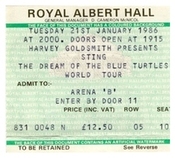 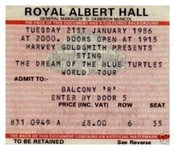