After a six-month world tour that's taken him round the Far East, America, Europe and Britain, Sting has last returned to London to show off his current band of distinguished black American jazz musicians. They are appearing at the Albert Hall for six nights this week, and the way the hall was dressed up says much about the occasion. The stage is simple, grand, and white, designed to show off tastefully Sting's carefully chosen off-white suit and dark blue T-shirt. The mood seems set for an evening of expensive, classy pop music.

The irony, of course, is that Sting is capable of far more than his glossy image suggests, while the band are used to playing within a completely different structure to that of his well-crafted songs. The result, even after all this time, is an uneven clash of styles.

The most brilliant passages were those where well-known songs were run unexpectedly together, while allowing the band to stretch out on solos. So the high point came when the reggae-tinged 'One World' from the Police album 'Ghost In The Machine', was mixed with a version of the new 'Love Is The Seventh Wave'.

There followed an equally exhilarating treatment of the pro-miners song, 'We Work The Black Seam', followed by a reworking of two more Police favourites, 'Bring On The Night' and 'When The World Is Running Down...' enlivened by a rap section from Marsalis.

Then, mysteriously, the magic started to fade. The moody, Weill-like 'Moon Over Bourbon Street' was relaxed and understated.

Sting rounded off with a section that made it seem that his powerful voice didn't have quite the emotional range to do justice to his varied and often thoughtful songs. The current hit, 'Russians', was exquisite, but there followed a messy 'Demolition Man' and an embarrassing sing-along to 'Message In A Bottle'. If he'd stopped an hour earlier it would have been a triumph. 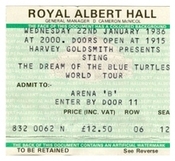