I always found the Police a rather turgid band, inhibited by the fact that the trio was built around Sting and his bass, not the most dynamic combination. Perhaps Sting felt the same for he is now touring the world with a very different backing, four black American jazz musicians.

The transformation is remarkable - out with the plod and in with the pizzazz. From the very first note of his Albert Hall concert on Monday the audience was taken on an exciting journey which, while not breaking new musical ground, revealed just how powerful and varied jazz funk can be. Some of the songs boogied along for fifteen minutes with no jot of tedium, and the unusual balance of instruments added a freshness rare in performances by superstars.

Sting concentrates on singing and is currently in sweet voice. Dominating on bass is Darryl Jones, who can actually make it sound emotional, while instead of a lead guitar there is Branford Marsalis on an array of saxophones. Behind them drummer Omar Hakin is unobtrusively powerful while Kenny Kirkland plugs the gaps on keyboards.

For over two continuous hours the quintet roars through music which combires the melodic artfulness of pop with the/challenging thrust of jazz. The crowd was on its feet within minutes and Sting provided the material, and the stage dominance, to steadily intensify the stimulation. Even the slower songs, like 'The Children's Crusade', are done at full throttle and there are singalongs, like ''One world's enough for all of us'' to make the audience feel needed. There was the odd unnecessary manifestation - dry ice covering up Hakim on his long solo, and a vast screen behind the band which stayed obstinately unused, but for once a pop star has changed up to a more challenging musical gear with satisfying results.

To start the encores Sting came back alone for 'Roxanne' and all the old Police hits. Even here, with the more imaginative and forceful backing, old songs revealed new pleasures, especially ''I'll be watching you.'' Sting looked relaxed about it all: he actually justified his reputation. As he quietly and soulfully sang ''I hope the Russians love their children, too'' the universal preoccupation with pop music, and pop musicians, seemed almost justifiable.

(c) The Financial Times by Antony Thorncroft
Comments
1
You must be a logged-in member to add comments. Log In | Subscribe
August 19, 2015 posted by Davidcdixon66
Blue turtles
as a young impressionable police fan I rediscovered Sing and music and had the great fortune to see Blue Turtles tour London 1986 at one of the greatest acoustic venues ever - Royal Albert Hall. The reinvention and new style was so different I found it hard to relate it to being the same Sting from the Police. Over the years these new feels to his music show the depth of his creativity, imagination, passion and amazing ability. A true artist we are blessed to have in our lifetimes.
Newer comments    1 - 1 of 1    Older comments 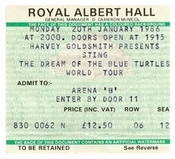