He may not be Tom Jones, he may not be Robbie Williams, he may not even be Bon Jovi, but Sting still made a big impression on Cardiff concertgoers last night. The former Police man, turned jazz rocker, turned acoustic balladeer opened Cardiff Castle's weekend of concerts in fine style.

In balmy temperatures and under a clear, perfect sky, more than 4,000 - mostly thirtysomethings and older - shimmied the night away, having first marvelled at the pyrotechnics of guitar legend Jeff Beck. More Glyndebourne than Glastonbury, the atmosphere throughout the night was respectful rather than rip-roaring, partly down to the majestic surroundings and partly down to the over-zealous stewards who were anxious to prevent anyone getting carried away in the aisles.

There was never any danger of that with Jeff Beck. By some distance the flashiest guitarist in the world, he suffers from his refusal to compromise. Legend has it he could have been the replacement for Mick Taylor in the Stones (Ron Wood eventually got the job) but he was always too much of a maverick for that. For someone who's been a star since the mid-1960s (he must be 54 at least by my reckoning) he looks no different to when he was terrifying audiences in the Yardbirds, although he does bear an uncanny resemblance to Nigel from Spinal Tap, complete with silver crucifix.

While more innovative than Eric Clapton, his brand of fusion jazz is never going to appeal to a mainstream audience. Although you have to admire him for his dogged refusal to even acknowledge 'Hi Ho Silver Lining' (his big, uncharacteristic party hit from the Sixties). A blast of this would have brought the house down but we had to settle for a sensational instrumental version of the Beatles' 'A Day in the Life'.

After that, Sting chose to open his set with some of his low-key world music - guaranteed to keep the audience glued to their seats. A rousing 'If You Love Somebody' reconnected him to the vast majority of the audience but it wasn't until 'Every Little Thing She Does Is Magic', his first Police hit of the night, that the audience leapt to their feet and got their yah-yahs out.

Once animated, the audience was never going to sit still, despite some ill -advised adventures in freeform jazz. They sang along to 'Englishman in New York' (not something that happens every day in Cardiff), loved 'Fields of Gold', 'Seven Days' and 'Brand New Day', were amazed by a blistering 'When the World is Running Down' but cheered loudest for 'Every Breath You Take' (by a mile the best song he's ever written), the solo acoustic encore 'Message in a Bottle' and a 10 minute audience participation version of 'Roxanne'.

It was a great night, made even better by the weather.

What's the betting, though, that Tom Jones really makes the place rock when he takes to the stage for his three concerts this weekend?

Since leaving the Police in 1983 at the height of their fame Sting's solo career has been maddeningly patchy, swinging from the creative highs of 'Ten Summoners Tales' to the comparative lows of 'Mercury Falling'.

Indeed it almost seems as if Sting has gone into a musical reverse gear as he has moved away from the power-pop leanings of the Police back to the jazz/blues eclectisism of his previous band, Last Exit.

Fortunately, current album 'Brand New Day' is very much a return to form.

The irony is that, as the songs have become more intimate, the venues have become larger and more impersonal. Thankfully, Cardiff Castle proved a much more sympathetic venue for his music. Sting took the stage looking far cooler than any 48-year-old has a right to.

Openers, 'A Thousand Years' and 'If You Love Someone (Set Them Free)', set the tone for most of the gig; always threatening to boil over into greatness, but never quite managing it.

On 'Seven Days' Sting still manages to give the band that look when notes are not quite reached or beats are missed.

This insistence on perfection that gave the Police their edge is also what keeps Sting's current band sharp, particularly on 'Moon Over Bourbon Street' where the nimble interplay of Chris Botti's trumpet, with Sting's vocals lifts a song that in other hands would sound mediocre.

Biggest cheers of the night were of course saved for the Police songs, but unlike Bon Jovi a few weeks ago no one can accuse the man of simply playing to the crowd as he also threw in lesser-known tracks such as ''hen the World is Running Down'.

The appearance of Andy Summers or Stewart Copeland that most people hoped for never happened and the gig did lack a certain raw energy, but in the sedate surroundings of the castle this was the perfect musical accompaniment to a balmy summer's evening.

(c) The Western Mail by Andy Johnston
Comments
0
You must be a logged-in member to add comments. Log In | Subscribe 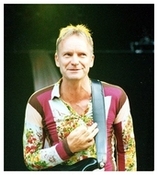 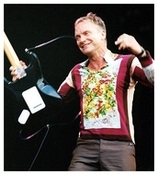