Anyone doubting Sting's popularity just had to see the tailback on approach roads to Marlay Park, Rathfarnham last night. The former Police frontman's faithful fans from the early days were certainly out in force.

Dressed in khaki combats and a funky multi-coloured top, his blond hair shorn short, the 49-year-old yoga fanatic was in great shape as he prowled the stage with his guitar over his shoulder.

He's still the pin-up of yesteryear but for the discerning Irish musical audience that's not enough as the attendance of 12,000 were predominantly male. The father of six has now been singing for almost 25 years and has embraced rock, reggae, jazz, celtic, country and Eastern music - snippets of which were all showcased last night. Much of the music in last night's show was from Sting's seventh and best-selling Grammy Award album 'Brand New Day'.

Sting's distinctive throaty voice ran through songs such as 'After The Rain Had Fallen' and 'We'll Be Together' as well as material from his back catalogue including 'Set Them Free' and 'Fields of Gold'. For the nostalgics,he indulged us with some classic Police anthems such 'Roxanne' and 'Every Little Thing'.

The biggest pity of the night was the lack of big screens for the crowd to get close-ups of the former schoolteacher.

When a pop singer is rich, famous, pushing 50 and a father of several, the urge to promote an album with a gruelling world tour usually diminishes.

But then Sting has always gone his own way. His current tour, which finishes tonight in Hyde Park, has consisted of no fewer than 300 shows.

While other stars spurn the parts of the world that have less disposable income than they used to - which means everywhere from the Far East to South America - Sting not only goes back to those places but insists on adding new stamps to his passport.

To many in the music business, Jordan is just a Page Three girl; to Sting it's another tour destination along with Tunisia, Latvia and Estonia. You can almost forgive him for doing that luxury car ad.

After 297 performances, he is entitled to be jaded, but that would be to underestimate the restorative powers of his leisure pursuits - yoga, cyber-chess and, of course, tantric sex.

On a mild, midgey night in a Dublin park, Sting comes bouncing on stage wearing an air of relaxed focus, a pair of well worn combat trousers and a shirt made out of old curtain fabric which probably causes acute embarrassment in all six of his children.

He gives the impression that he would happily go round the world again, as long as he can take his musicians with him.

There are nine of them, ranging from Senegalese drummer Manu Katche to the young British jazz pianist Jason Rebello, and Sting is so proud of them that he introduces them all twice.

From the first number, 'A Thousand Years', it is clear that this will be an evening not of theatrical spectacle or celebrity worship, but of music.

Sting himself rolls out a reggae-tinged bassline, just like he did long ago with The Police, Katche and his assistant on percussion whip up a husky, sun-baked rhythm, complicated but effective; the crowd wait patiently for the big melody, which is nicely delayed.

Sting once claimed, with a touch of arrogance, that he could write pop choruses in his sleep but what interested him was to try something different. His best songs do both.

The album he is nominally promoting, 'Brand New Day', sank without trace in Britain before going on to win Sting's umpteenth Grammy Award. On this evidence, America judged better than we did.

'Brand New Day' itself and 'After The Rain Has Fallen' slot comfortably into the first half of the show beside bigger hits such as 'We'll Be Together' and 'If You Love Somebody Set Them Free'. 'Desert Rose', the Anglo-Arabian mini-epic that got dragged into a Jaguar commercial, is held back for the climax of the evening, among the Police hits, and it is not outshone.

Sting tends to be stereotyped as a bleeding heart liberal bursting with concern for the victims of everything from dictatorship to deforestation, but his songwriting has long since moved on.

If his lyrics used to be those of a man who studied the foreign pages of the newspaper, they now suggest a man who is always reading books to his children, full of references to castles, ghosts, horses and sleeping princesses.

The timeless imagery suits Sting's soaring, Arab- influenced vocals, but you find yourself mourning the campaigning numbers that have been dumped along the way - 'They Dance Alone', the majestic tribute to the Mothers of the Disappeared in Chile, is surely to good a song to leave out.

In its place we get 'Fill Her Up', a throwaway country jig from 'Brand New Day' whose sole claim to fame is that it may be the only pop song ever written from the point of view of a middle-American gas station attendant. But Sting rescues himself with the stately lyricism of 'Fields Of Gold', played so quietly that you can suddenly hear your neighbours talking on their mobiles.

And when he kicks into a euphoric version of 'Every Little Thing She Does Is Magic', you want to get on the phone yourself, and relay it to someone you love.

Sting's band are due to reassemble to record a live album, on which familiar songs will be given unfamiliar arrangements. They do a bit of this tonight, with mixed results.

'Moon Over Bourbon Street' turns into a jazzed up trumpet-fest which sacrifices the stealth of the original, but an 'Englishman In New York', which can be arch on the radio, grows into something loose and warm and clearly strikes a chord with 10,000 Irishmen and women in Dublin 'Be Yourself,' they sing, 'no matter what they say'.

It's dark now, and cool, and someone is passing through the audience handing out candles, with cardboard collars thoughtfully attached to catch the dripping wax. One section of the crowd after another comes alight as the band move into the classic hits segment of the show.

There's 'Roxanne', full of warmth and colour, 'Every Breath You Take', still sinuously catchy after all these years, and 'Message In A Bottle' (not on the set list), elegantly stripped down to voice and guitar. Given that they date from the late Seventies and early Eighties, a period currently giving endless amusement to weekend TV audiences, these songs have retained their dignity to a remarkable extent.

'Desert Rose' reminds you that Sting can still write a chorus with fire in its belly, and he finishes not a with a greatest hit but a song that peaked at No70 in the charts. 'Fragile', half protest song, half lullaby, a tune of timeless beauty and an object lesson in how to deeply the classical guitar without descending into schmaltz.

Sting started his solo career by making a pop album with some high class jazz musicians. It could have been a gimmick or a superstar's whim, but 16 years later, he is still ploughing the same furrow.

It is time we gave him a little more credit.

(c) The Mail On Sunday by Tim De Lisle
Comments
0
You must be a logged-in member to add comments. Log In | Subscribe 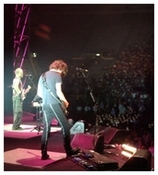