For a pop superstar, Sting is taking a spare, no-nonsense approach on his current concert tour, which played a packed Woodlands Pavilion Sunday night. Dressed plainly in a grey vest and baggy pants, the former Gordon Sumner performed with five musicians on a bare stage. The light show was simple, with a few colourful projections, and the sound mix was clean and clear, perhaps owing to the fact that this date was being broadcast nationally on radio.

But while glitz and hype were admirably eschewed, there's a middle ground between a no-frills show and an overproduced spectacle that spares no expense. On previous tours, Sting has brought backing vocalists and extra percussionists, and they would greatly help now. So would a better opening band. Soft rockers Jars of Clay, while able musicians, performed their painfully earnest songs for almost an hour. Only the lively, set-closing 'Flood' transcended their stream of acoustic, melodically mundane pop with faint echoes of Toad the Wet Sprocket.

So Sting had no hard act to follow when he took the stage to play the first four songs off his latest album, 'Mercury Falling'. And that was for the best, since his band took time to galvanise. His new material is good, though, even if it hasn't yielded hits like his past solo albums. Sting wound up 'The Hounds of Winter' with howls, then plunged into his best new song, the ringing 'I Hung My Head', followed by the gentle 'I Was Brought to My Senses' and 'Let Your Soul Be Your Pilot'.

The last lost its gospel fervency through the absence of backing voices, which also would have helped 'If You Love Somebody Set Them Free'. Guitarist Dominic Miller pitched in, but he's no real singer and has the showmanship of a gnat. Not so sax man Butch Thomas and trombone player Clark Gayton. They often gambolled, clowned and bound around the stage, performing with both precision and abandonment. Vinnie Colaiuta on drums and Kenny Kirkland on keyboards also flanked the British star, who was in strong voice and was steady on bass.

Steady isn't always good. Most music stuck closely to studio arrangements, with few adventurous departures. Only at set's end did the band jam with prolonged instrumental flourishes. Indeed, Kirkland stole the show with an inspired jazz solo for 'When the World is Running Down', one of many Police songs which were adoringly received by the crowd.

Others included 'Every Little Thing She Does is Magic', 'Demolition Man', 'Synchronicity II', 'Roxanne' and an encore of 'Every Breath You Take'. Post-Police, that classic ballad has acquired a sustained rock finish on stage, but Sting only flirted with that arrangement here. While such songs are rightly beloved, relying on them in concert risks turning Sting into an oldies act, most embraced for music that is receding on rock's horizon. While his Police songs rocked, his superb solo music has long made Sting an eclectic artist. Sunday night, those ranged from the haunting romanticism of Fields of Gold to the countrified lilt of 'I'm So Happy I Can't Stop Crying' and the jazzy bounce of 'Englishman in New York'. Songs needn't be hits to make an impact.

I'll add - I really enjoyed the show in Dallas. But I personally wish he would quit playing 'Every Breath You Take'. It is without a doubt my least favourite song. Just an opinion. The showmanship of the brass section was the most memorable part of the show for me.

(c) The Houston Chronicle by Bruce Westbrook
Comments
0
You must be a logged-in member to add comments. Log In | Subscribe 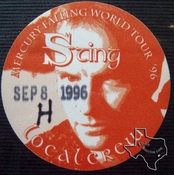 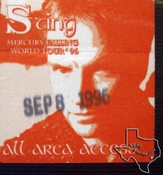