Who would have thought that there'd ever be a trombone solo on 'Roxanne'?

Yet, there it was at Sting's concert Tuesday for a packed Blockbuster Desert Sky Pavilion. The brawny solo proved an appropriate ska-like addition to the reggae flavour of Sting's first hit (from his late '70s debut with the Police).

All 19 songs in the two-hour show featured similarly thoughtful new touches to make the concert experience a decidedly different animal from Sting's recordings.

The former Gordon Sumner, looking a little more like the ''King of Rogaine'' than the King of Pain, worked hard at putting on a good show while also playing interestingly textured music. The set list drew equally from his Police years and from his solo career.

Take, for instance, 'When the World Is Running Down, You Make the Best of What's Still Around' from 1980's 'Zenyatta Mondatta' album. On record, it's a short, intense pop song moved by Sting's insistent bass line.

In concert in 1996, the song became a long showcase for the piano talents of Kenny Kirkland, best known for his work in Branford Marsalis' band. Kirkland's sure, jazzy work let the song flower in repeat choruses. The song's rhythmic underpinnings also were tweaked for ultimate danceability.

Sting, who never seems to have had a spontaneous moment on record, proved quite the charmer onstage, fronting a band that also included guitar, drums, saxophone and trombone.

He called one fan onstage to sing with him on the country-flavored 'I'm So Happy I Can't Stop Crying'. In the bargain, he also accepted a plea from another fan who wanted to play bass. Luckily, that fan laid down a solid foundation for the sardonic divorce song.

Although Sting's voice can seem mannered and even cold on record, at this show, his voice had a husky quality that seemed less studied and more buoyant.

Similarly, where on record his songs seem focused on the intellect behind the lyrics, in concert, they become pure body music, making such tunes as 'Every Little Thing She Does Is Magic', 'Every Breath You Take' and his recent 'Lithium Sunset' big crowd pleasers.

Certainly, Sting's crowd wanted to dance rather than sit still for the gorgeous balladry of 'Fields of Gold', and he gave the audience as many reasons to dance as possible.

Even so, he never sacrificed the intelligence of his blend of jazz, world beat and rock sounds. He just pumped them up and forced them over the top, so they could carry a rock show.

The question of full enjoyment still hinges on whether a person likes or dislikes Sting's personality. This is a guy who has an inner spotlight. He's impossible to ignore onstage.

For all the sensitivity of his lyrics and for all the craftsmanship of his music, he's mostly a big ham, which, in rock music, is often better than musical craft.

Earlier in the evening, the Cowboy Junkies battled bravely against muddy sound to deliver a dreamy set of tunes, including the Velvet Underground's 'Sweet Jane' and their own 'Misguided Angel'. It's too bad lead singer Margo Timmins' voice was lost in the mix.

(c) The Arizona Republic by Salvatore Caputo
Comments
0
You must be a logged-in member to add comments. Log In | Subscribe 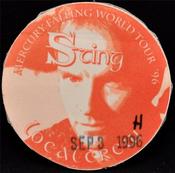