Aug
30
1996
Irvine, CA, US
Irvine Meadows Amphitheaterwith The Cowboy Junkies
1
Share
One of the best evenings of music in Orange County this year...

There are so few moments in rock history that achieve the proverbial state of bliss.

Roger Daltrey's scream at the end of The Who's 'Won't Get Fooled Again' is one of them. The intro to the Beatles' 'Revolution' - not to mention the outro to their 'A Day in the Life' - certainly qualifies.

But for pure euphoria-inducing pleasure, you need a song that can take you from the bluest funk straight to an otherwise unreachable high in no time flat, then sustain that peak long after the record has ended.

Personally, I'll take Sting's searing live take on his own 'When the World Is Running Down, You Make the Best of What's Still Around' from the 'Bring on the Night' soundtrack. Eleven sweaty minutes of an unbeatable blend of slinky jazz, steady R&B and sardonic rock, it has the ability to transport me emotionally and mentally to places I rarely go.

That version came from Sting's first solo tour following the disbanding of his groundbreaking group, the Police; subsequently the former Gordon Sumner has repeated it on every tour. It's become something of a barometer for the quality of his shows: If it burns, the show is great; if it lags, the show is by-the-numbers.

Unfortunately, that gauge can no longer be used. The mercury has burst out, not fallen, as Sting's latest album suggested. The numbers simply don't go that high.

In a flawless performance Friday night at Irvine Meadows Amphitheatre, Sting bested all of his previous appearances in Southern California on every account, proving himself to be not only a consummate musician but also a charming, endearing showman and an instinctually gifted bandleader who just happens to have one of the most singular voices in pop history.

And, testing the gauge one last time, how was his latest version of 'When the World Is Running Down'?

Coupled (as always) with a bit of 'Bring on the Night' and set next to a scorching 'Demolition Man', it was perfection. A propulsive mix of post-apocalyptic madness and live-it-up-for-tomorrow-we-die swagger - and with a blistering solo from keyboardist Kenny Kirkland that was equal parts Neville Brothers pizazz and Thelonious Monk cool - the 15-minute jam made that other end-of-the-world anthem, Prince's '1999', sound as nasty as a Disney soundtrack.

In 1985, as Sting embarked on his first solo tour surrounded by jazz heavies such as Branford Marsalis and Omar Hakim, the songwriter noted that the difference between playing jazz and playing rock is that a jazz artist must be given time to wander around in the song, try it on like a new coat and get used to it before letting loose his best licks.

Rock, he said, was just the opposite; you have to burn from the get-go.

Sting's career since then has been an ongoing attempt to reconcile the two, fuse them into a genre-busting whole. His goal was never as revolutionary as, say, Miles Davis' jazz-fusion experiments, but for a pop world anesthetized by dull balladeering, shallow dance music and rote rock, it was a welcome shot in the arm.

He's only achieved it on record once - 1987's 'Nothing Like the Sun'. Now he's finally achieved it in concert. If the 'Sun' shows saw Sting trying to bring dark textures to R&B, and his 'Soul Cages' and 'Ten Summoner's Tales' gigs brought out the true rocker in him, then this tour was a combination of the best parts of his past with a reinvigorated outlook on his future.

Nothing missed: A calypso-flavored 'Every Little Thing She Does Is Magic' that retained its nuances amidst its storming drive; a sprightly 'Seven Days' that greatly underscored the fact that few in pop can tip-toe around tricky time signatures so well; a revitalized 'Roxanne'; and a more relaxed (and, thus, more poignant) 'If I Ever Lose My Faith in You'.

In fact, relaxation seemed to be the order of the evening. Never has Sting appeared so at ease on stage, chatting comfortably with the crowd and at one point calling up a member of the audience to help him croon 'I'm So Happy I Can't Stop Crying'.

And that ease, along with the punchy horns of Clark Gayton and Butch Thomas, added greatly to numbers fromhis latest album, the uneven 'Mercury Falling'. Songs such as 'I Was Brought to My Senses' and 'I Hung My Head' were completely rearranged, while some that were woefully ordinary on record (You Still Touch Me) came to life here.

This was pop of a supreme sort. And with a wonderfully gentle opening set from Cowboy Junkies - who, though not designed for larger, outdoor venues, smartly stuck to more charged material such as ''A Common Disaster'' and powered up versions of quieter numbers, such as their take on ''Sweet Jane'' - it made for one of the best evenings of music in Orange County this year.

(c) The Orange County Register by Ben Wener
Comments
1
You must be a logged-in member to add comments. Log In | Subscribe
March 21, 2017 posted by dannyolb
Jazz and Rock hit a high point
Album is a unpopular release but Sting and Company rock the OC and make oranges fall off the trees! Terrific set list and great performance By the Man and Drummer VC? Was Botti on this one? Gave a full set and encores galore..... Awesome night.....
Newer comments    1 - 1 of 1    Older comments 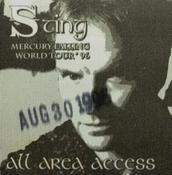