When English rocker Sting began fronting The Police in the late '70s, his role was that of young punk upstart, shaking the thrones occupied by the Rolling Stones, Pink Floyd, Led Zeppelin and others.

But after nearly 20 years as well as six kids, a dozen or so rain forest benefits, and tens of millions in royalty checks Sting's now a rock aristocrat himself. And it was this serious, more refined rocker who performed at the Marcus Amphitheater Friday night.

His current tour showcases past solo and Police material along with work from his new CD, 'Mercury Falling', a musical renaissance man's mix of rock to jazz, blues to bossa nova. Its music casts more adult lyrical themes on topics that range from aging, lost love and fading dreams to hope, renewed joy and redemption.

Sting's music and stature perhaps have been enhanced in the last 10 years, but the visual aspect of his live show came simple and sparse: a six-piece backing band, complete with a pair of horn players and background screens projecting silhouettes of tree branches and other abstract mirages. (Deadlines prevented a review of the entire show).

Amid the heap of rock tours this summer, few feature as many tempo and key changes as Sting's, whose artistic goal of the last decade seems to be about matching mature music and lyrical themes into a rock concert pace. In concert, he maintains his rock sensibilities and charisma, but even past material comes dressed in jazzier, more complex arrangements.

The new work is equal parts light jazz and rock, with traces, of, dare say, New Age, with many songs containing dreamy synthesizers and soft, cymbal-intense drumming. And like Sting's voice, the lyrics come in a soft, commanding tone, almost song-delivered sermons perhaps a trace of Sting's former profession as a grade-school teacher.

Later, Sting raised the crowd a notch with a romping and spacey jazz take on 'If You Love Somebody Set Them Free', with the horn players alternating their fills with claps and dances, and the crowd chiming in on the chorus.

Starting things off was genre-bending singer-songwriter Lyle Lovett, who performed a 45-minute set of his quirky Nashville torch singer-meets-Dylan ballads. An uneasy fit in country, folk or alternative bins, the singer, actor and brief husband to Julia Roberts engaged the crowd with typically eclectic songs from his new CD, 'The Road To Ensenada'.

In concert, King Sting removes his crown and gets to try on the commoner hats.

From a 10-gallon cowboy hat to a commando suit, Sting wears it well. For more than 100 minutes Friday night at Milwaukee's Marcus Amphitheater, Sting and a lively five-man band stormed through the Police line and threw in some solo career hits that landed with more mellow music from 'Mercury Falling'.

Sting's first appearance came as a surprise when he appeared in a white cowboy hat to assist opening act Lyle Lovett in 'ong Tall Texan'.

Sting would return the favor when Lovett joined him on 'I'm So Happy I Can't Stop Crying'. When Sting previewed his new album, 'Mercury Falling' in March, he promised a New York crowd, ''We'll be back this summer and we'll be better.''

And songs such as 'Hung my Head', 'Hounds of Winter' and 'You Still Touch Me' made that point.

But Sting's backup singers are missed. And so is his cleanly shaven face. Sting is sporting a goatee these days. And you'd think that by selling seats at $44.50 he could afford to buy a shaver or at least take his limo to Cost Cutters. ''He should have had Steely Dan instead of Lyle Lovett and saved us all a lot of money,'' one man said.

Steely Dan played Alpine Valley Saturday and was expected to draw the same jazz and fusion loving 25- to 50-year-olds willing to pay more that $40 for a fair but far from front row-seat to see Sting. In his commando costume, Sting wore combat boots, military-style pants, and a button-up tank top. He stomped and sang through such songs as 'Every Little Thing She Does Is Magic' to 'Synchronicity' and 'Demolition Man'. Sting is a demolition man, stealing from various genres and making them his own. An athletic horn section brought soul to 'Roxanne'. While 'Englishman in New York' took a stroll through a different piece of the Big Apple, adding a hip-hop hit to the end of the song.

'Fields of Gold', 'If I Ever Lose My Faith In You' and the encore Fragile were treated faithfully.

Lovett played a 45-minute opening set that took fans down 'The Road to Ensenada' with his eight-piece Large Band.

(c) The Wisconsin State Journal by Natasha Kassulke
Comments
0
You must be a logged-in member to add comments. Log In | Subscribe 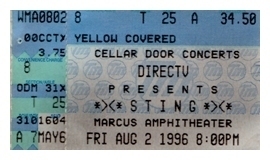