He is known as a singer, songwriter, musician, rock star, environmental activist and semi-reluctant sex symbol.

And now, after Friday night's sold-out performance at Molson Amphitheatre, Sting can add to that list the role of matchmaker and relationship counsellor.

Mid-way through his eminently entertaining concert, he invited a fan named John to join him onstage for the curiously uptempo 'I'm So Happy I Can't Stop Crying',' a song about divorce.

It turns out John was at the show with his girlfriend of 12 years, a time-span that astonished the twice-married Sting. It was also the woman's birthday.

''Twelve years, and you haven't married her?!'' he gasped. ''And it's her birthday?! Why don't you propose to her?'' he insisted, before performing the country-flavoured tune about splitsville.

''Have you asked her yet?'' Sting called out after the put-upon John had returned to his seat.

John may have been playfully stung by Sting, but the exchange roused the crowd to a feverish level.

The high spirits were evident earlier when Sarah McLachlan opened the show. Not that McLachlan is your typical ''opening act.'' A year ago, the Vancouver-based singer/composer headlined a near sell-out show at this very site, and could probably have done the same on her own this season.

Friday night, she offered a somewhat eclectic showcase of songs, backed by a spare but effective two-man band. Yet, even when she strapped on an electric guitar for a couple of raw, highy amplified numbers, McLachlan didn't escape the cerebral and atmospheric textures that have become her trademark. Still, the audience was reverent as she settled into majestic deliveries of 'The Path Of Thorns', 'Mary' and Joni Mitchell's 'Blue'.

Any and all ethereal traces evaporated the minute Sting and his crack five-man band appeared onstage.

A rich, earthy feel was the conceptual link for their first four numbers, all of which appear on Sting's introspective new album, 'Mercury Falling'.

Then it was time for the mercury to rise to near-boiling with soulfully energetic takes on 'If You Love Somebody Set Them Free' and 'Every Little Thing She Does Is Magic', the latter song dating from Sting's days as frontman for The Police, the wildly inventive British trio that recorded five studio albums from 1978-1983.

While some quiet moments followed, namely 1993's 'Fields Of Gold', it was Police songs such as 'Synchronicity', 'Roxanne' and 'When The World Is Running Down (You Make The Best Of What's Still Around)' that electrified the audience of 16,000, with Sting, sax player Butch Thomas and trombonist Clark Gayton providing an athletic, all-out physicality.

Sting's own highly physical presence brought out the expected swooning, and he played it like a pro. ''You love me?'' he responded with mock bemusement to one love-struck fan. ''But you hardly know me.''

Not that it mattered to the woman professing her love. Yet Sting was able to rise above the sexual posing with songs that reflected a soul-searching artist who is both sensitive and refined.

It's not often that you get two first-class musical artists on the same stage for the price of one. Which is what made last night's stellar double bill of Sarah McLachlan and Sting at the Molson Amphitheatre so darn special. And the sold-out crowd of 16,000 knew it.

It's hard to say who's the more talented of the twosome - undoubtedly one of the best lineups of the summer concert season so far considering the domination by '70s and '80s retreads and festival shows. McLachlan - who sold out the amphitheatre last summer as the headliner but opened for Sting this time - was in strong ethereal voice as usual and moved seamlessly back and forth between piano, acoustic and electric guitar. Accompanied solely by her bass player and drummer, McLachlan concentrated on material from her most recent album, 1994's two-million selling 'Fumbling Towards Ecstasy'.

Standout songs included 'Good Enough', Ice, 'Elsewhere', 'Possession' and 'I Will Remember You' from The Brothers McMullen soundtrack, not to mention a great but thwarted attempt at the Oasis song 'Wonderwall'. Standout clothes had to be McLachlan's shiny, perforated green pants. Sting, meanwhile, was also something to behold in a clingy grey vest - which showed off his toned, tanned arms - silk grey combat pants, black combat boots and a goatee.

Looking as young and fit as ever at age 44, he took the stage with a five-piece band - including a two-man horn section - and a stunning light and slide show. He began understandably enough with 'The Hounds Of Winter', 'I Hung My Head', 'I Was Brought To My Senses' and 'Let Your Soul Be Your Pilot' off his jazzy new album 'Mercury Falling'.

And one woman in the audience was so moved she yelled out her undying love. ''You love me?'' said the former leader of The Police. ''You hardly know me madam.'' But it wasn't until Sting finally rocked out that he won over the entire crowd. First with 'If You Love Somebody Set Them Free' and then the Police gem, 'Every Little Thing She Does Is Magic'. The biggest surprise was that more Police songs followed, interspersed with Sting's solo material, including 'Synchronicity', 'Roxanne' and 'Every Breath You Take'. Can a reunion tour be far off?

''Thanks for choosing us as opposed to the opening of the games,'' said McLachlan, earlier in the evening, making reference to the Olympics.

As if there was any choice.

(c) The Toronto Sun by John Sakamoto
Comments
0
You must be a logged-in member to add comments. Log In | Subscribe 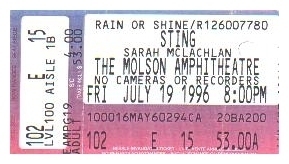