The air is dry as Friday's sun sets, illuminating with lingering light the stage at Jupiter's Temple. A growing audience settles in as the Beatles blare from the speakers. ''Some songs never age,'' smiles my neighbor. That's what most of the audience is counting on, I'm assuming, as they wait, biting fingers, clutching hands, for the appearance of one of pop-rock's most celebrated icons. Despite his 20-year solo career, Sting still has trouble escaping from the 1970s, when he burst onto the music scene with the Police.

One wonders, looking at the ''bastard'' crowd, as my neighbor puts it ''young, old, hippies, Frenchies'' how well they know Sting, or whether they're simply drawn by the big name. Certainly the girl in front of us is a bonafide fan, as she rattles off her latest Sting sighting at a hotel in Zahle that morning. ''They wouldn't let us get an autograph,'' she frowns. ''Oh but he's so cute!''

Quarter-to-nine and the 49-year old star emerges as the last fans settle in for Sting, even the most cultured make it on time kicking off with 'A Thousand Years' from the 1999 album 'Brand New Day', which has lent its name to the tour.

If the crowd is unfamiliar with the tune, no one minds. In a matter of minutes, even the worst curmudgeons the ones asking enthusiasts to sit down and stop dancing have started dancing themselves. By the band's second song, the better known 'If You Love Somebody Set Them Free', Baalbek's 4,500-plus guests are up on their feet and waving their arms.

From there, the concert never slows. The six-member band steamrolls through two decades of Sting's solo songs at a pace giving the audience no chance to sit. Lebanese durbake player Paul Avanian joins the band for 'After the Rain Has Fallen'. He and the band's drummer, in knit hat and sunglasses, then erupt into the French rap 'Perfect Love...Gone Wrong', another release from 'Brand New Day'.

The concert appears flawless no sound breaks, no black-outs. When Sting kicks into 'Mad About You', a song about ''the region'' he once said, the audience sings along, or at least joins in with vocal enthusiasm.

The only frustration seems to be Sting's avoidance of Police songs (never mind that it is a 'Brand New Day' tour and Sting has been solo since 1984) as evidenced by the pleas of some audience members to ''play the Police!'' Sting finally does, with an upbeat rendition of 'Every Little Thing She Does is Magic'.

But the highlights of the show come in the idiosyncrasies of songs that may not have been so familiar. In the jazz influenced 'Moon Over Bourbon Street', Sting spotlights his trumpet player, who explodes with a flurry of scales. Sting's vocals, known for their wide-ranging intervals and clarity of tone, never falter as he and his trumpet player play off each other's skills. With all six band members at times joining in for harmony, the background is tight, every song full.

The set list is poignant: 'Desert Rose', Sting's Arab-influenced new release which to the disappointment of the crowd was performed without Rai singer Cheb Mami wafts through the venue with eerie aptness. After an encore of 'If I Ever Lose my Faith in You', followed by 'Every Breath You Take', Sting returns for a second encore in which he starts off solo with 'Message In a Bottle', a Police song about abandonment and the loneliness of being unheard. His final song, 'Fragile', bears an unmistakable message: ''That nothing comes from violence, and nothing ever could, lest we forget how fragile we are.''

Ending after two hours, the only complaint of the evening was that the concert was too short. As we're herded into the buses that will bear us back to Beirut there's no doubt, between the pushes and the shoves, that everyone from Police aficionado to Sting worshipper has just left one of the best shows of the summer.

(c) The Daily Star by Amal Bouhabib
Comments
0
You must be a logged-in member to add comments. Log In | Subscribe 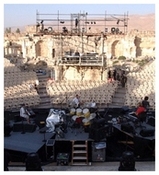 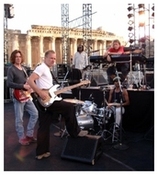 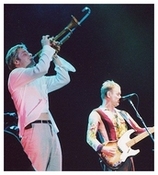