He is a pop star for the political correct. He has been and remains dedicated to Human Rights and the Rainforest. At a concert in Estonia's capital Tallinn he remembered Estonians that have been deported to Siberia in the past. He didn't want to use a too expensive Hotelapartment in Vilnius, Lituavia and practises yoga.

He's a popstar for all generations. Some already danced to 'Roxanne', when others weren't even born. Because kids aren't embarrassed by him, their parents can admit they like Sting without shame; and they like each other. Sting is also a popstar for romantic people, who are thankfully making use of beautiful words like 'Every Little Thing She Does Is Magic' for example.

He makes World Music. Not in a true sense, despite his latest hit 'Desert Rose', but the more in geographical sense. The current tour leads him amongst others through Greece, Lebanon, Turkey and Switzerland. In Estonia and Lithuania he's already been and in each city he greets his fans in the local language.

Sting doesn't make real World Music; first of all he makes Sting-Music. Just as distintive as his clear and rather raw voice is also his sound. If he's rocking, swinging , playing a Samba, 9/8 or reggae beat one easily feels familiar with his sound. His songs are catchy, but not in a cheap way. That also makes him a popstar for those who don't want to admit they like Elton John.

Sting is something like the square of the circle. A popstar, who isn't a popstar. A good musician. A songwriter - who will probably never be nominated for the Nobel Prize for Literature like Bob Dylan - whose lyrics everyone can sing along to without remorse. A routineer - but it doesn't show during his concerts. The fan gets value for his/her money. Guaranteed.

For the second time Sting is touring Germany with his 'Brand New Day' album, which was released in the autumn of 1999... and no, he didn't peform any new songs like some fans might have hoped at the Open-Air-concert at the Wiesbadener Bowling Green. One had to put up - not to regret - with nearly two hours of good oldies : 'Roxanne' of course, Sting allows his musicians to improvise to a certain extent; 'Moon Over Bourbon Street' which is served with a delicious jazzy sauce by Chris Botti on trumpet; 'Englishman in York' is sung with devotion by everyone, despite them being Wiesbadener, Ruedesheimer or Sèrumse. Then at the end, 'Fragile', which ends with a wonderful soft and melanchonical Pling-Pling; it makes everyone patient for a place in the half-an-hour queue at the multi-storey car-park checkout.

(c) Frankfurter Rundschau by Sylvia Staude / translated by Lithium Sunset
Comments
0
You must be a logged-in member to add comments. Log In | Subscribe 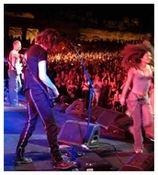