Jun
16
2001
Riga, LV
Nemo Park
Share
As the night of the concert by our honourable guest Sting turned into morning, the people we met in the Casablanca restaurant told us that Sting had been here and had a cup of tea. Alone, with no bodyguards. And why not? In Tallinn he had been walking alone in the streets for a few hours. He himself had been happy with the concert, he enjoyed the venue and that the audience had not been too large, no more than ten thousand - approximately that planned by the organisers (Makarov Muzik). We are also happy that now, finally, we have a place - the water attraction park Nemo, where such concerts should be organised.

This place is also more convenient for driving to and where to leave the car than Mezaparks and is not so far from Riga as Pauku Priedes in Valmiera. Almost ideal - a large space with green grass, which during a single concert cannot be damaged like during a festival when people keep trampling in the same place for few days. In the opinion of the organisers, entertainment park Nemo could admit even more people than this concert's limit (12,000), but that will be the next time.

It's 7 p.m. and the movement of the cars after a small traffic jam gives us hope that we will not be late for the concert. Many of us were unpleasantly surprised that after standing in the long line we found out that besides the all usual stuff like bombs, sharp objects and drinks they could not bring inside umbrellas or even bags which were a little bit larger than handbags. There was a luggage storage area where these things could be left, but that would mean that you have to stand in a line once again. Many people left their umbrellas near the gates together with their stock of drinks which were left outside. Only Coca-Cola and Cesu Beer were available inside the territory. The average age of the audience was between 35 and 40 years. Some moments it was raining, but it did not make the stage less visible.

The overall punctuality is surprising - a minute and a half before 9 pm the musicians came onto the stage. Sting was the last one, the same as on the posters - hair style, face, black strip-shirt, bass. They start playing at 9 pm with great precision - what you expect from such high level musicians. Sting's voice sounds completely the same as on the albums, and a few songs have been rearranged for concerts. For example, the old good The Police song 'Roxanne' from his first album 'Outlandos d'Amour' has been enhanced with some electronic sounds and made longer. That brings into the very punctual concert some new and interesting shades. As soon as 'Every Breath You Take' was heard comes the revelation that this is the very best song he has ever created and most probably will ever be created by Sting.

This song has some magic which is in no relation to the radio stations and ads which try to associate Sting with this song. But why, even in this song, does Sting not venture to step away from the original or try any games with the text and his voice? I could not stand it and started to play with texts and improvise the song on the background of the song's 1983 version. Fantastic! It happens: Sting as if he would hear me does the same, but he could not hear me, as I was too far away. Again magic. All musicians are acting as singers - guitar player, both keyboard players, sometimes it seems that even the trumpeter sings, but the one who stood out with a vocal solo was the drummer who suddenly jumped in front of everyone and demonstrates a wonderful rap in French.

Suddenly the concert is over. I look at my watch and do not want this - the promised 1.5 hours are finished. Sting is also punctual in this respect and after 'Fragile,' where he plays acoustic guitar, at 10:34 p.m. music starts playing over the PA, because there is nobody on the stage anymore. And again it's Sting.

(c) Diena by Uldis Rudaks/translated by Rudite Jaunzeme
Comments
0
You must be a logged-in member to add comments. Log In | Subscribe 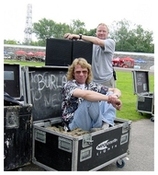 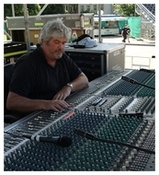 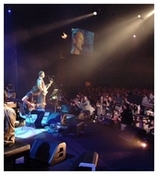