Sting performed August 26 at the Frank Erwin Centre at the University of Texas, Austin. The concert was sold out and seats with a face value of $55 were being sold for up to $100 per seat in our section. Opener Jonny Lang is a 19 year old blues guitarist, popular with the younger crowd, who put on an hour of rousing blues and rock numbers. He has a singing voice is rough and raspy, sounding more like an old whisky and Marlboro man, but his speaking voice revealed his tender age.

Our seats were in the arena section, to the right of the stage, about 14 rows from the main floor. Some scattered enthusiastic Sting fans (myself included) stood up and danced on the upbeat numbers, but most of the crowd remained seated, passive listeners to the performance.

As the 'Brand New Day' tour continues (how do they keep up the pace?) there have been a few changes to the set. 'Mad About You' and 'Tomorrow We'll See' have been omitted, as well as 'I'm So Happy I Can't Stop Crying' reducing the double dose of country to the single Nashville flavoured 'Fill Her Up'. The big crowd pleasers seem to be: 'Englishman in New York', 'Roxanne' (of course!) 'Every Little Thing She Does is Magic', which usually gets even the most sedate fans to their feet, with Bring on the Night / When the World is Running Down being the high energy peak of the show. Manu Katche's French rap on 'Perfect Love...Gone Wrong' was a big hit, and Chris Botti and Sting play up the competition on their ''who can hold the longest note'' contest. (Chris has taken to looking at his watch, timing Sting's contribution.)

'Desert Rose' was well received, as was 'Brand New Day', which had a brand new sound, by the way, and wasn't immediately recognisable. Kipper sported a new, spiky hairdo. Sting wore his trademark black tank top and khaki cargo pants.

Sting made a few comments about Texas, such as during the repeated phrase ''Be yourself, no matter what you say'' on 'Englishman in New York' he said ''Isn't that the state motto in Texas?'' Also he challenged the audience's tepid reaction to the call and response section of 'Roxanne' by shouting, ''Isn't this Austin, Texas? The Austin, Texas? Well, let's hear you then!'' He also took a final bow by singing a few lines from 'The Yellow Rose of Texas' which was much appreciated by the crowd.

In the midst of a hot Dallas summer night, Sting brought in the cool breeze.

The revered Englishman opened his show Friday night at Smirnoff Music Centre with 'A Thousand Years', a lush, moody number from his 'Brand New Day' album. Behind him and his six-piece band, strips of sheer white fabric crisscrossed from the ceiling to the floor, billowing with each subtle rhythmic pattern. In turn, Sting casually swayed as he delivered the lyrics.

Talk about setting a mood. Then again, Sting has spent more than two decades writing music and words that create an ambience. One minute he's doing the reggae thing, conjuring up images of tropical islands and long dreads. Then the next he's mixing jazzy interludes with pop songcraft, putting the listener somewhere between a piano bar and a Top-40 radio station. And before you know it, he's bound to turn solemn with a beautiful melodic ballad tailored for heavenly swooning.

He took more than 17,000 fans Friday night to all those places. Sting, with blues-rock opening act Jonny Lang, continues to tour in support of 'Brand New Day', a 1999 release that just recently cracked the Top 10 almost a year after its chart debut. Such success is a testament to Sting's durability as an artist and a hitmaker. He's back on the radio with the world-beat-laced single 'Desert Rose'. How heartening it is to hear sophisticated pop persevere next to so much teen drivel and aggressive rap-rock.

Sting performed much of the album onstage, weaving newer cuts with older solo material and some Police classics. At times he even blended two seemingly disparate songs. The soaring 'After the Rain Has Fallen' segued nicely into the soulful 'We'll Be Together'. 'Fill Her Up', a wonderfully jaunty country tune that morphed into a high-mass gospel rave-up, somehow - almost magically - set the stage for the quiet power of 'Fields of Gold'.

Through it all, Sting was loose, happy. His platform personality deserves mention because in the past the chiseled singer-songwriter has put on concerts that moved at a methodic pace. He was like a human jukebox running through the staples of his career. Not this time. He shook his hips, obliviously caught up in the beat. He bounced playfully as he strummed his bass guitar and then paraded himself from one end of the stage to the other.

And yes, as expected, there was at least one experimental, jam-band moment. During 'Perfect Love...Gone Wrong', his drummer turned rapper and his trumpet player took the spotlight while Sting crooned behind the microphone.

In between songs, Sting still doesn't do a whole lot of talking. He's never been a chatty performer. But with a repertoire as smart and palatable as his, the music speaks volumes.

You can always tell when an artist is playing new material or old simply by the crowd's reaction: Those in the audience stand up and cheer the old songs they know and sit through the new stuff.

English pop singer Sting and a six-piece band walked that line Friday night at Smirnoff Music Centre before a crowd of about 17,000. On one hand, Sting has a new disc to tout, 'Brand New Day', so, of course, he played quite a few selections from it; the audience sat through most of those.

On the other hand, he was the lead singer of the Police and, whatever your feelings about now-solo artists playing songs from their then-bands, he had an obligation to revisit those days, especially with the $100-per-ticket price tag. When he played a Police song, the audience was enraptured.

To his credit, though, Sting nicely balanced the two worlds, focusing on 'Brand New Day' but also performing a handful of Police songs and, of course, the best of his solo back- catalog, which offered the evening's finest moments.

Since his days with the Police ended, Sting has gone in a far jazzier direction, layering his pop songs with lush orchestrations, trumpets and soft piano washes, and 'Brand New Day' is his most experimental disc yet. But not all of those experiments worked Friday night. 'Perfect Love ... Gone Wrong', Sting's attempt at hip-hop - in which his drummer rapped, not him, thankfully - was just plain silly, and the show's opening number, 'A Thousand Years', meandered without purpose.

Of the new material, 'Fill Her Up' was the best - a song within a song, a country tune that melted into ambient, Brian Eno-esque territory before ending on a heated, gospel note.

Other highlights included his playful but meaningful tribute to the chaotic beauty of New York, 'Englishman in New York'; an ethereal version of his soft ballad 'Fields of Gold'; and a breezy, jazzy run-through of the Police's 'Every Little Thing She Does is Magic. There was a predictable performance of 'Roxanne', a song to which he's emotionally tied (it was the Police's first hit); but the song has simply lost its luster. It's clear why he performs it, though: It's a sure-fire way to get the crowd on its feet.

(c) The Fort Worth Star Telegram by Malcolm Mayhew
Comments
0
You must be a logged-in member to add comments. Log In | Subscribe 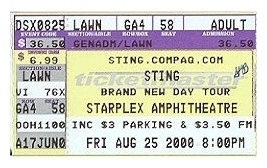