After a year of tightening and toning, the ex-Police man turns a flabby show into a muscular one.

The difference between jazz cats and rock stars, said the Englishman who's a bit of both, is that rock stars have to burn from the get-go.

No slow build to an impressive finish. No sauntering around a refrain until it feels right. You got 12 bars for your solo? Better be soaring by at least the third. You got two hours of stage time? Better have 'em dancing in the aisles minutes after the house lights black out.

Jazz cats, on the other hand, can take their time, get comfy, settle into a mood, a zone, a groove. Dig deep, then deeper and deeper. Dial into those instincts. Use the force, Luke. Whatever works. We'll wait. Sting has spent the better part of two decades straddling these two approaches - and succeeding brilliantly, as was the case (for the most part) Friday night at the Verizon Wireless Amphitheatre in Irvine.

As post-punk icons go, Sting is in a class by himself, and he proves it again and again effortlessly. No one fuses modern (lite) jazz, fecund funk, anthemic rock and now (and alas) international flavors with as much skill and savvy - sometimes audacity, too.

And only a select few in all of pop music - the list could fit inside a fortune cookie - have a voice as undeniably striking and soul-piercing. It remains his greatest asset - and astoundingly it's more powerful as the guy nears 50 than when he first belted 'Roxanne'.

What's more, he can switch between jazzbo flow and blueprinted pop faster than you can flip on the high beams in that new Jaguar he just convinced you to buy. Yet it's ever-expanding: Where that balance of freedom and formula once was noticeable only song to song, now it's evident show to show.

In other words, though Sting's set Friday night was almost identical to the one he delivered in October at Universal Amphitheatre (right down to the choice of Police revamps), it is drastically improved. The former gig was nine dates into the tour and found the superstar icy cold; like all hepcats, he needed time to warm up. Now, the jazzer inside has taken over. Sting got his groove back, and now he's coaxing and massaging beauty out of it.

So is his band, it should be added, a group that once sounded utterly generic but here appeared to truly grasp these complex, polyrhythmic arrangements. And where once there were gaping holes in the backing (so long David Sancious, we still miss you Branford), new hotshots are emerging with gusto.

Most notable: trumpeter Chris Botti, who gave 'Seven Days' sexy Latin flourishes and helped make 'Moon Over Bourbon Street' a dirty Dixie ditty (with Sting doing his best Satchmo), and pianist Jason Rebello, whose electrifying work on the extended 'Bring on the Night' jam rivaled Kenny Kirkland's. (Actually, this version may be the best take since '86.)

And under their still-Adonis-like leader's wise direction, nearly everything connected - everything, that is, except Sting's latest material. Lacklustre and lazy, only two songs from 'Brand New Day' stand out - the sunshine-filled title track, remarkable for its optimism, and the ubiquitous 'Desert Rose', remarkable for its dreariness (though here it got a wise Moby-esque face lift).

The rest constitute the first batch of unmemorable songs this veteran has ever written. Certainly the crowd wasn't humming them on their way out. If anything, they were chanting those old Police hits. (And I've said it once, and I'll say it till I'm dead: You haven't lived until you've heard 15,000 or so yell ''RAAWWK-SAN!'')

Besides, Sting didn't look as though playing these new tunes did much for him - at least, not as much as tackling the obvious did. There were occasional missteps with those, too - the close of 'Every Little Thing She Does Is Magic' lacked adrenaline and, sadly, 'Every Breath You Take' has become the cheesy love song he always swore it wasn't.

Those were forgivable, for the bulk was excellent. And the clunkers, well, they once again uncovered the flaw in Sting the Internationalist, who has replaced Sting the Fusionist: Worldly style can't make up for a lack of great songs.

No matter how long this jazz cat is given to warm them up.

(c) The Orange County Register by Ben Wener
Comments
0
You must be a logged-in member to add comments. Log In | Subscribe 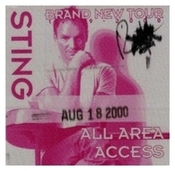