When Sting left The Police in 1984, the band was at its peak of popularity. Synchronicity was the biggest album of the year, and The Police sold out venues like Shea Stadium. Most people would not have had the guts to leave such a lucrative gig and go solo, but he did, not wanting to wear out his welcome.

That is why it is so disappointing to see him doing so now. There was nothing fresh or interesting about his performance at the Greek Theatre in Griffith Park Tuesday night. It was slick, sure, and polished, and professional, but even the biggest hits sounded worn out. Roxanne, for example, was sung, not with the fervour of a man who has invested all his passion in the wrong woman, but from the point of view of a man who has nothing left to prove.

And this is true: what does Sting have left to prove, anyway? He must be a multimillionaire by now, he has a solid marriage, grown children. He has explored most musical styles, from reggae to rock to jazz. He has even tried country (that was a bit unfortunate, he should have left that musical stone unturned). What more could he want? Nothing, really.

That complacency came through Tuesday night, making everything he played feel like a retread. Most disappointing was the way he played Police hit 'Bring on the Night'. The song was combined with 'When the World is Running Down'. That medley would have been different had he not recycled it from his mid-'80s 'Bring on the Night' Tour. That was a tour when he still had something to prove. And the arrangements for more recent songs from albums such as 'Nothing Like The Sun' and 'The Soul Cages' seemed unchanged from the way he played them when this reviewer saw 'The Soul Cages' tour in 1991.

Surprisingly, this all appeared acceptable to the sold-out audience. But then, most of the people at the Greek that night seemed to be in a similar place in their lives as the artist they were watching, sipping imported beer and conversing amiably about whether junior would go to law school after graduating from SC. Their ability to converse in such a way was assisted by the fact that the music was played at quite a sedate volume. To give Sting some credit, he did seem a bit frustrated by the crowd's lack of enthusiasm during much of the concert. Most remained seated most of the time, peering at him politely through rented binoculars, standing only during Police hits such as 'Every Little Thing She Does is Magic'.

And they stood, of course, for 'Every Breath You Take'. But the stalker anthem, unfortunately, had absolutely no edge. When the song first came out, it had a creepy intensity. That intensity was brought home by the blackand-white video, when Sting convinced those watching him that he was quite capable of watching them. But the way Sting performed it at the Greek, 'Every Breath You Take' may as well have been a fuzzy love song.

Still, there is no reason, at least financially, for Sting to retire. 'Brand New Day' has sold very well and won several Grammys. He has an aging core audience.It is just that, to quote a lyric from the song Brand New Day: ''I don't want to be no fuddy duddy.''

Sorry, Sting, but you may already be there.


Sting works his magic at the Greek...

Sometimes you can't escape your past.

It was about 40 minutes into Sting's show at the Greek Theatre on Tuesday (the first of four nights) when - as if on cue - the audience stood up as the British rocker played the first few notes of the Police hit 'Every Little Thing She Does Is Magic' from the 1981 album 'Ghost in the Machine'.

Until then, Sting had done a mixture of songs from his Grammy-winning new album, 'Brand New Day', and songs from earlier in his solo career. Taking the stage dressed in a sleeveless black T-shirt and grayish-black cargo pants, the trim 48-year-old Sting with his short-cropped blond hair doesn't look much different than he did when he hit the rock scene with the Police in the late '70s. Backed by a a tight six-piece band with guitarist Dominic Miller and keyboardist Kipper, he kicked off his one-hour, 50-minute set with the atmospheric 'A Thousand Years' from his new album, then segued into 'If You Love Somebody Set Them Free' from his first solo album, 1985's 'The Dream of the Blue Turtles'.

With his bass guitar slung low, Sting bounced or swayed his hips to the music as he sang. Unlike many of today's acts who churn out the music on stage like it's from a jukebox, Sting and bandmates interacted like, well, a real band, and while the interpretations of songs for the most part didn't depart radically from the album versions, they at least had an organic feel.

Despite his superstar status (the limos were triple-parked outside the theater with license plates that read stuff like ''A List''), there was nothing like that in Sting's stage presence, which emanated a joyfulness and playfulness that has endeared him to his fans. During his first break in the music, he looked out into the audience and saw two young women holding a sign. He read it to the crowd. ''We want to belly dance for you,'' it said. ''I'll get back to you later,'' he told the women. Toward the end of the set he asked the security guard to bring the two women to the stage, and after hugs, introduced them as Angie and Sue.

He then launched into his recent hit 'Desert Rose', a seductive song of longing with a Middle Eastern flavor. As it turned out, Angie and Sue weren't bad, but not professional by a long shot, as they scrambled to make up their choreography as they went along. Women probably want to dance for Sting at every concert, so the singer may have done something like this before. What made the moment, though, was that Sting seemed so unconcerned that the women would somehow disrupt the performance as they careened around the stage. (Perhaps it's a sad note that in the tightly controlled world of music, there is little left to chance.)

With a more than 20-year career and numerous chart-topping songs, Sting can make almost any concert seem like a greatest-hits collection. Some of the highlights included older songs like 'Fields of Gold', 'An Englishman in New York', 'If I Ever Lose My Faith in You', 'Every Breath You Take' (unofficially known as the stalker song), 'Moon Over Bourbon Street' (with a nice Louis Armstrong growl and driving trumpet) plus songs off his new album such as 'After the Rain Has Fallen' and 'Fill Her Up'.

Sting has taken a few dings in the press lately for his associations with big money. Compaq sponsors his tour and he does a commercial for a luxury car company using the song 'Desert Rose'. Part of the criticism stems from the fact that he has always championed causes like saving the Amazon rain forest, so to some it seems like a sellout. However, he has continued to support his causes. (The irony here is that so few of the younger acts today - whether they're pop, alt rock or hip-hop and rap - display any social conscience at all. In fact, quite the opposite - yet little is made of that.)

Through the years, you get the feeling Sting could roll out of bed and write a hit pop song, but that he has had other ambitions. Instead, he has incorporated elements from his jazz background and world music in his work. Watching him Tuesday it was clear that he was more interested in his newer, more complex tunes; nevertheless, he didn't begrudge his fans their love of oldies and gave them what they came for. His second-to-last number, which was during his third encore, was a lovely version of the Police's 'Message in a Bottle', which he did without his band, accompanying himself on guitar. He turned the pop quality of the tune into a wistfulness, and it worked perfectly as a lead-in to the lovely 'Fragile' from his 1987 album 'Nothing Like the Sun'.

Leave it to Sting to sober up an intoxicating evening.

(c) The Los Angeles Daily News by Rob Lowman
Comments
0
You must be a logged-in member to add comments. Log In | Subscribe 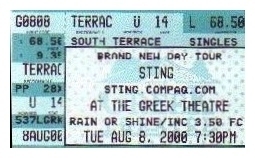