At first blush, it's an odd pairing: k.d. lang, who sprang from the backwoods of Canada to become a neo-country singer extraordinaire in the early '90s, and Sting, one of the last remaining relevant rock stars from the '70s, whose days in the early punk band the Police bear little resemblance to his current incarnation as king of world-easy-listening.

But look a little deeper, and the pairing makes perfect sense. First, the audience for both singer/songwriters is similar (baby boomers with a sense of cool), and secondly, it's all about sex. Both musicians exude sensual, playful passion - in different but equally devastating ways. (The sex appeal of Sting, Mr. Tantric Yoga, goes without saying. And if Lang, who's a lesbian, tossed a look my way, I'd have to seriously reconsider my orientation.)

''You're my lover tonight,'' growled Lang in her sultry alto to a breathless young woman in front of the stage at the Shoreline Amphitheatre, and that set the tone for her near-hour of romantic balladry. Throughout, the selling-point was Lang's remarkable voice: rich and full, so supple that she seems to caress every note, so powerful she can, Sinatra-like, pull one note up a full octave without breaking a sweat.

Lang, by her own definition ''a big-boned gal,'' was wearing loose-fitting linen pants and a peach-colored top, and looked positively glowing. She stuck pretty closely to her new album, the luminous 'Invincible Summer', with a few older songs thrown in for fans of her earlier work.

'Consequences of Falling', with its leisurely ache, hinted at her earlier work on the brilliant 'Ingenue', which catapulted her to fame in 1992. An accordion provided the backdrop for a good-humored, schmaltzy 'Miss Chatelaine', also from that album. And of course, she did a stirring, sexy 'Constant Craving'.

Lang's only shortcoming was a certain awkwardness as a performer. Although she joked and flirted, she seemed a little unsure of her delivery, interpreting every song pretty much the same way. One would have hoped for more of a sense of angst at times, especially with emotion-soaked songs like the lovely 'When We Collide'. But she delivered the goods to her fans, especially in 'Extraordinary Thing', which allowed her to pull out the stops on her vocals, almost blowing the canopy off the amphitheatre.

Sting, in a body-flattering sleeveless tank top, took the stage like it was his God-given right (which is almost is at this point), and tore into 'A Thousand Years', just the sweeping, new-agey barn-burner he's become known for in recent years. Wherever you come down on the question of what the former Gordon Sumner has done with his career, abandoning rock for jazz fusion and world beats, there's no denying his stage presence and vocal chops, seemingly undiminished after all these years. His 90-minute set covered the gamut of his influences, including funk and even a little hip-hop.

He served a healthy helping of songs from his newest album, the Grammy-winning (if uneven) 'Brand New Day', and smartly peppered his 90-minute set with oldies. 'If You Love Somebody Set Them Free' was a smartly-jazzy classic, as was a sexy, tub-thumping 'We'll Be Together Tonight'. And off his best album, 'Ten Summoner's Tales', the heartbreakingly-romantic 'Fields of Gold'.

Sting dipped in the Police catalog for the shimmering 'Every Little Thing She Does is Magic' and a dramatic, halting 'Roxanne', which proved Sting's vocal prowess still burns brightly. The audience seemed equally ecstatic with both older tunes and newer hits, like 'Brand New Day' and the gorgeous, Middle-Eastern-influenced 'Desert Rose' which is seemingly on every radio station.

Normally I'm not a fan of big back-up bands, but in Sting's case, the size was for a purpose. With two keyboards, a trumpet, two guitars and a drummer, Sting's band had all the tools required to cook with steam throughout the night. The trumpet-fueled 'Perfect Love Gone Wrong' was especially exhilarating. And 'Fill Her Up', the faux-country romp, sizzled with double-entendre (or maybe that was just my brain on overload.)

Grinning like a self-satisfied satyr, the former King of Pain knew that even with thinning locks and softer tunes, he's still got it.

(c) The San Francisco Examiner by Jane Ganahl
Comments
0
You must be a logged-in member to add comments. Log In | Subscribe 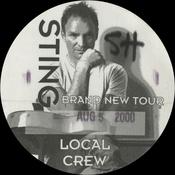 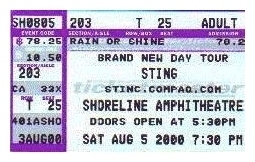