There was an air of the safe and predictable Friday night at GM Place, when Sting performed the peak songs of his two-decade plus career.

That sat fine with the audience of 9,000 fans, who took almost an hour to finally get to their feet for Sting's big hit 'Every Little Thing She Does is Magic', but remained enthusiastic for the remainder of the 100-minute set.

Leaving little room for error, the 48-year-old singer and bass player gave a flawless show that seldom deviated from the song's recorded versions. It could have benefited from a little freewheeling improvisation, however. The back-up vocals sounded suspiciously like pre-recorded backing tracks at times, particularly on 'If You Love Somebody Set Them Free' and the title track from his new album, 'Brand New Day'.

Always the dabbler, Sting led the band through a jazzy, trumpet-decorated new number called 'Perfect Love Gone Wrong' that cut away briefly for a rap section courtesy of the drummer, Manu Katche. His ease contrasted with the somewhat stiff stage presence of Sting, who didn't move far from his large spotlight with a music stand nearby. The song proved the first big warm-up for a set that opened with a new song, 'A Thousand Years', and included 'Fields of Gold', 'Englishman in New York', 'Roxanne', new hit 'Desert Rose' (impressive torch effects couldn't make up for the absence of Arab singer Cheb Mami, who sang on the recorded version) and 'If I Ever Lose My Faith In You'.

The first few notes of 'Fields of Gold' excited fans in the audience, and Sting stripped down the band, focusing on some lovely acoustic guitar by Dominic Miller. It was a gentle, perfect version that readied the crowd for another old favourite, 'Every Little Thing She Does is Magic'. Sting later led the crowd through an extended version of 'Roxanne' with some reworked keyboards and guitar parts that gave the song a jazzier flavour. Sting's voice is still strong, and while he is rather unemotional, he gives the sense that he's got a strong attachment to these songs. He's not such a great showman in the sense that he didn't make much of an effort to engage with his audience, however. Unlike previous shows on this tour, on which he told anecdotes and joked with his audience, he scarcely said a word Friday night.

Backed by her eight-piece band, k.d. lang opened the show with an ultra casual performance of her own that had no shortage of anecdotes. Leaping around the stage, barefoot and wearing baggy, loose, comfort clothes, lang was totally enthusiastic and at ease, despite the face that her audience was clearly unfamiliar with her new songs and only seemed interested in her older hits. Overall, it was a lacklustre performance.

Just before Sting took the stage at GM Place last Friday, one of his guitar techs strode out with a Stratocaster and, while checking the sound of the on-stage monitors, banged off a few power chords, even conjuring a brief moment of feedback. ''That's the raunchiest this show's ever gonna get,'' I thought to myself, and I was right. But that's okay. I hadn't come expecting to see the former Police man leap about amid the ska-punk racket of his old power trio. I realize that he's mellowed into the kind of laid-back, adult-contemporary artist fans of Celine Dion and Yanni admire. I was mainly there because my younger sister is a big Sting fan, and if taking my siblings out to see acts like Sting, Elton John and Tina Turner is what's needed to keep the family together, so be it.

Sting started things off quietly with 'A Thousand Years', the opening track of his current 'Brand New Day' CD, noodling away on electric guitar before switching to the familiar bass for his 1985 hit 'If You Love Somebody Set Them Free'. Even though I'm not Sting's number one fan, I certainly admire his skills as a singer-bassist. He's the only one-named wonder among the likes of Bono, Cher, and Madonna who's proficient on an instrument as well as vocals. And his immaculate band - which included two keyboardists, a guitarist, a drummer, a backup vocalist/hand percussionist, and an awesome trumpet player - was an accomplished ensemble that ranged effortlessly between the new album's country-and-western (Fill Her Up), hip-hop (Perfect Love...Gone Wrong), and funk-pop (Brand New Day) stylings.

At the first sign of a Police song - 1981's 'Every Little Thing She Does Is Magic' - large portions of the crowd suddenly stood up and started acting like rock fans. A few tunes later Sting got them all riled up again with his choppy hooker ode, 'Roxanne', and the extreme audience response made me wonder what's stopping him from getting back together with Andy Summers and Stewart Copeland and packing stadiums everywhere with a Police reunion tour. Judging by his healthy glow and muscular physique, I'd guess that Sting could still leap about if he needed to.

And seeing as everything from his ticket stubs to his huge stageside banners signified corporate involvement with the ''sting.compaq.com'' plug, he obviously likes money. The undying love people have for the Police was driven home by the wild reactions Sting got for including 'Every Breath You Take' and 'Message in a Bottle' in his impressive four-song encore.

(c) The Georgia Straight by Steve Newton
Comments
0
You must be a logged-in member to add comments. Log In | Subscribe 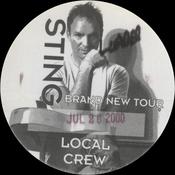