We should only be so lucky.

And that statement friends, has absolutely nothing to do with the artist formerly known as Gordon Sumner...

As evidenced at Sting's recent outdoor concert at Long Island's Jones Beach Theatre, old rock stars never die - their fans just get older and uglier. How depressing! Imagine it for yourself. You're a bona-fide legend - the former front man for The Police. You're a prodigious singer/songwriter - the author of some of the greatest pop songs of the last four decades. You're a pretty decent actor (granted 'Dune' and 'The Bride' royally sucked, but you were pretty menacing in 'Lock, Stock and Two Smoking Barrels'). You've saved the rainforest (or at least parts of it). You look great. You sound even better. You have lots of tantric sex...

It's almost show time. You smell the salt water waltzing in the air. A warm breeze blows across your freshly-shaven face. Then you, guitar in hand (yes, most of the time you play bass, but you're opening with a haunting guitar riff), and your band of melancholy men hit the stage and launch into 'A Thousand Years', the ethereal, hypnotic lead off track from your new CD, 'Brand New Day'.

Then the lights go up. Here it comes, baby, the money shot. There seated (yes, seated) before you is an entire stadium of fans. Fans? Gadzooks! What the hell happened? Who replaced those hot bleach blondes in ripped Police tee shirts with these catatonic, divorced mothers of three who look like they've spent the better part of 1999 under a sun lamp at a rehab clinic for women with really bad dye jobs? And who the hell are these balding accountants and soft-bellied stock brokers in Banana Republic khakis. Where are the kids? Why is everyone pushing middle age? And why, in the name of all that's sacred, why does everyone have this withdrawn, glazed-over uneasiness in their eyes like Charlie Manson after he sniffed a pound of cocaine off some hippie chick's backside and heard 'Helter Skelter' for the first time.

Then a ray of enlightenment hits. This is Long Island, dude. Everyone was expecting Rosie O'Donnell and Mandy Patinkin to show up and sing 'Piano Man'. I should have realized. Well, east coast complacency has to drain somewhere, doesn't it?

Well, despite the catatonic crowd, Sting and his band of musical mercenaries kicked the Island's ass clear back to Newcastle, England. His nineteen-song set focused primarily on his solo material and included seven songs from his Grammy Award winning CD, 'Brand New Day', including the near pop perfect 'After the Rain has Fallen', his somewhat cheesy, though catchy millennial song, Brand New Day, and possibly his finest song ever recorded as a solo artist - the exotic, North African-tinged, 'Desert Rose'.

Backed by an array of gifted and distinct musicians including Peter Gabriel's drummer, Manu Katche, long-time sideman and guitarist, Dominic Miller, producer and keyboard player, Kipper, and jazz trumpet player, Chris Botti, Sting had the freedom to concentrate primarily on his vocals, leading the group into a number of improv jams throughout the night. From the funky 'We'll Be Together' to the gospel-flavored 'Fill Her Up' to the smoky, atmospheric Anne Rice anthem 'Moon Over Bourbon Street', to the jazz adrenaline of 'Bring on the Night'/'When the World is Running Down You Make the Best of What's Still Around', Sting shined as singer, composer and arranger. But all the credit fell on the individual band mates, who wailed away at their instruments with a feverish obsession. Unfortunately, these brilliant breaks of musical adventure also served another purpose - bathroom break for the majority of the audience.

Question: How do you bring thousands of snobby, elitist, indifferent individuals out of a coma? Answer: Play some old songs everyone has heard a gazillion times. Everyone loves familiarity; and it stirs the dead into a deeper level of deadness. Sting's no silly limey. He knows this emphatically and, from the look on his face, disdains this part of his job. 'Every Little Thing She Does is Magic' and 'Every Breath You Take', once defining moments of the 80s new wave, have turned into tired self-parody. Sting, however, still the consummate showman (and probably desperate for some reaction from the crowd), played three classics from his old Police days. For a short while he was able to breathe a little life into those dry tubers with a massive sing-a-long. Sometimes you have to give the crowd what they want, even if it isn't good for them.

You had to laugh nervously for Sting, who's still one of the most intelligent and diverse artists on the pop scene today. Watching twenty thousand corpses chant Roxanne-O over and over again from atop a sound stage must have looked like an Orwellian nightmare. 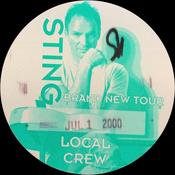