Musicians lucky enough to enjoy extended careers face a curious conundrum in concert. If they play new material instead of the songs that padded those IRA accounts, they risk alienating the faithful.

The venerable Gordon Sumner, better known by his stage name, Sting, doesn't have to worry about such defections.

As Sting's show Sunday evening at Nissan Pavilion at Stone Ridge proved, his new material often draws as enthusiastic a response as 'Roxanne' and other established hits. Sturdy new tracks such as 'Desert Rose' and 'Brand New Day' anchored the performance, which proved Sting is anything but an oldies act despite his extensive Police record.

The concert featured a generous sampling from his Grammy-winning CD 'Brand New Day', but he had plenty of material with which to round out the performance.

The night's main drawback, aside from the downpour that drenched lawn-seat denizens, was the lack of chitchat. Perhaps Sting understands the fickle bond between singer and audience and didn't feel the need to pretend the connection would last more than a few hours.

Regardless, good banter can make a live concert something special, and its absence made Sting's pitch-perfect performance seem less than transcendent. Good thing he's got that voice to distract us. Vocal fatigue is a natural by product of life on the road. Yet Sting sounded as if he had spent the past month at a spa retreat, not winding his way cross-country. His voice soared with every song. The singer-songwriter giddily pushed his vocal limits early and often to marvellous effect. This might have seemed cocky had his eyes not sparkled with musical delight. Sting did not gain his success as a byproduct of studio tinkering, unlike some of his younger peers.

Clad in a dark tank top that revealed sinewy arms, Sting looked a bit younger than his 48 years. Even his crumpled hairstyle is aging well.

The evening's song selection fell on the safe side. Respectable numbers such as 'If You Love Somebody Set Them Free' and 'All This Time' deserve attention, but the night would have been magical if he had dipped deeper into some of his lesser-known album tracks.

For one song, 'Moon Over Bourbon Street', he did just that, and the results were electric. He pranced and growled over the lyrics, basking in their sinful secrets.

For 'Roxanne', Sting shook off any rust the now-classic song might have accumulated, turning it into a blistering account of an ignoble profession. Neither he nor the audience appeared weary of the song that established his old band, the Police, as a musical presence.

One of the singer's strengths in concert is his knack for beginning a song, then segueing into another. He did so a few times Sunday, squeezing in snippets of older Police songs to tease the crowd. The trick works both musically and practically, giving fans more of what they want.

The backing band, with which Sting repeatedly shared the spotlight, provided stellar accompaniment. The trumpet player, in particular, matched Sting note for glorious note. He let his boss win during one number as the pair tried to see who could hold a note longer. Call it tantric singing.

For 'Desert Rose', Sting invited international crooner Cheb Mami to share the stage. Sting announced him as one of the greatest singers in the world. That's debatable, but what's certain is the beauty of the song and its curiously noncommercial rhythms.

Although Sting uttered nary a sentence during his set, opener Jeffrey Gaines would not shut up. Perhaps more than two decades of touring made the evening's main attraction, the cool crowd pleaser with the one-word name, let his music do the talking.

(c) The Washington Times by Christian Toto
Comments
0
You must be a logged-in member to add comments. Log In | Subscribe 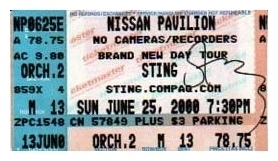