Paul Simon and Sting: On Stage Together

Last month, Paul Simon and Sting spoke with Rolling Stone about their "On Stage, Together," tour. "We come from very different places, culturally," Simon explained. "Our voices are different, our accents are different, our sense of rhythms are different." And he's absolutely right. Where the beloved half of Simon & Garfunkel pulls influences from folk music and worldbeat, Sting's roots are in rock, pop, soul and reggae. To be honest, I wasn't quite sure how these two seemingly different icons could possibly pull off a collaborative tour, and to my delighted surprise, they proved to me that it can be done, and done well.

The duo began their set covering Sting's "Brand New Day," followed by Simon's "The Boy In The Bubble," with each musician playing his signature bass and acoustic guitar, respectively. From the first note of the first song, it was evident that this pairing was not by mistake. To an objective observer, it was impossible to tell which of the songwriters originally penned each track. They shared the reins on every song, taking turns singing verses and producing spectacular harmonies. Their chemistry was organic, and to someone who didn't know better, it would seem as though these two had played in a band together. It was like a reunion for a group that never existed.

While the two singers collaborated, so did their bands, which totaled at 14 backing musicians. Together they transformed Sting's legendary ballad, "Fields of Gold," into a chilling duet; they made The Police's heart-wrenching "Every Breath You Take" even more powerful (a feat I didn't think was possible); they soothed the audience with Simon & Garfunkel's "Bridge Over Troubled Water," and ended the night side by side with," When Will I Be Loved," a tribute to the late Phil Everly.

However, the two-hour-and-forty-five-minute long set was not reserved solely for a combined performance. Though 10 of the 30 songs were played together, each musician treated the crowd to solo material as well. Sting kicked it off, while Simon took a break. He didn't waste any time and jumped right into "Every Little Thing She Does Is Magic." Suddenly, his energy changed and he regained his frontman vigor, thrusting his pelvis as he thumped his bass. His fans, as if on cue, arose from their seats to dance and sing along. He threw in other hits from The Police like "Roxanne," and "Walking On The Moon," along with upbeat solo material ("Englishman In New York,") and sweeping anthems ("The Hounds of Winter," "Desert Rose").

The way he gyrated onstage and his endless amount of energy made it hard to believe the singer is 62 years old. And maybe even more astonishing is the fact that Simon is 10 years his senior! As the musicians seamlessly weaved on and off stage, using duets as a simple segue, their personal performance techniques shined through. While Sting strutted his vibrant charisma, Simon emitted a warm, endearing nuance. He lulled the audience with the beautiful "Dazzling Blue," and "Still Crazy After All These Years," and got them dancing with "Me And Julio Down By The Schoolyard," "Graceland," and "You Can Call Me Al." As the night progressed, the cunning singer-songwriter seemed to loosen up a bit. Though he never gifted his fans with a pelvic thrust, he bobbed around, giving his iconic exaggerated strum every now and again, and when not hindered by a guitar, he expressively fluttered his hands about, just as enthusiastically telling the story with has hands as with his lyrics.

Sting and Simon might call the "On Stage, Together" tour an experiment, and in many ways it is; however, a mere five dates in and the chemistry is already uncanny. It will be exciting to see how well the two perform together by the end of the tour.

Critical Bias: Considering their ages, I was more than impressed with Sting and Paul Simon's energy and immaculate sound.

The Crowd: People who bought The Dream Of The Blue Turtles and Graceland the day they were released.

Overheard In The Crowd: People yelling, "sit down," to two enthusiastic fans who, god forbid, were showing their appreciation by standing up during a slow song.

Random Notebook Dump: I was by far the youngest person at the concert who wasn't escorted by a legal guardian.

Paul Simon & Sting Take The Stage Together At The Honda Center...

From longtime neighbors to tour mates, Paul Simon and Sting's unexpected musical partnership for a one of kind joint tour is one for the books.  Fresh off a show at the Fabulous Forum the night before, the two renowned musicians took the stage together Sunday night for their second SoCal performance at Anaheim's Honda Center.

The show brought in an eclectic mix of fans spanning generations, proving that their music continues to be just as popular as the day it was recorded. Though coming from two entirely different backgrounds both culturally and stylistically, Simon, 72, and Sting, 62, captivated the audience with their "experiment" as Sting noted with a near three hour performance of 30 songs that highlighted each artists' vast catalog.

Opening the set with a duet of Sting's lively hit "Brand New Day" off his 1999 effort of the same name, the natural chemistry between the two artists was quickly felt as they traded lead vocals while playing their respective signature instruments; Simon armed with his acoustic guitar and Sting with his bass. With the audience out of their seats, they then shifted gears to Simon's equally as spirited "The Boy In A Bubble" that was driven by the duo's combined 14-piece backing band before slowing things down with a duet of Sting's ballad "Fields Of Gold."

The night switched back and forth from collaborative duets to solo performances of greatest hits. Sting dazzled with both solo hits including "Englishman In New York" and "I Hung My Head" and re-imaginings of Police classics like "Every Little Thing She Does Is Magic" and "Message In A Bottle." Simon shined on mellow hits including "Dazzling Blue" and "Still Crazy After All These Years" before getting the audience dancing with "Me and Julio Down by the Schoolyard" and "Graceland."

Sting noted in an interview with Rolling Stone last month that their goal of this tour was to "raise each others' game" on stage together. Stylistically the two may come from opposite genres - Simon with roots in folk-rock and Sting taking notes from rock, punk and reggae - but together their blend of sounds and harmonies is a perfect pairing that will only continue to flourish as they take this "experiment" on the road.

(c) Radio K-Earth 101 by Britt Bickel
Comments
0
You must be a logged-in member to add comments. Log In | Subscribe 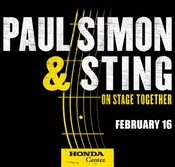