Back to Bass Tour

Sarah, Leah and I made up the British contingent of fan club members who embarked on a whirlwind trip around France last week; back on the “Back to Bass” tour trail. Even by our own standards, we set the bar high with a packed itinerary that encompassed four concerts (opting out of a pit stop in Amneville, purely for logistical reasons and in order to grab some extra time to soak up some sun, in Nice) on this leg of the tour.

Our journey started in Lyon (where Helen joined the posse) and for the purposes of this review I’m going to concentrate on some of the many highlights in Bordeaux. “Seven days will quickly go...” (David Sancious keyboard skills excel during this, not sure where the “Mouse sound effect” was tonight? (During the Mouse or man, mirror squeaked lyric) always funny when the sound surprises Sting).

It was time then, to brush up on our language skills and know the difference between a “Canard” and a “Renard”, (something’s really don’t get better with age) and my spoken French is one of them, when a waiter asks you to speak in English, you know when to respect good advice.

While we are on the subject of “Renards”, I was particularly pleased “The End of the Game” is still in the set. I do love Sting’s introduction to the song, we were laughing when during the explanation about the song he refers to Monsieur and Madame Fox. :) We always seem to get a lot of glances from Sting during the rendition probably because we are bopping around and mouthing out the lyrics, when the majority of the audience appears to be static. Sting is probably thinking what’s up with them? Anyone who has heard Helen’s fox story will appreciate why we are smiling at this point.

Talking to a professional musician before the Bordeaux concert we discussed at great length how excellent the “Back to Bass” tour is and how many references to fine wine can we compare the tour to during our conversations? (A grand château full) To some of the fans waiting patiently outside the venue we might have appeared to be a walking Thesaurus of all things music related, I overheard one person saying it was their first ever Sting gig,(mine too, at this venue LOL J) what a night for this fan to start their concert tally off!

Sting was clearly enjoying himself and was particularly happy with the audience participation and energy from the crowd and the band’s performance that evening. Many of the crowd felt particularly blessed not only because Sting was playing Bordeaux (local fans were telling me, many big International artists miss out Bordeaux on the tour circuit and play Toulouse instead, Sting’s been there as well) but that local fans have another chance to see Sting again, as he played in the region earlier in the year.

In one of those, (amazing, meant to be moments) where we were re-united with a local fan (Jenny) who had remembered us from the Arcachon concert in the summer.

It wasn’t just the excitement, energy and loved up nature of the crowd, which makes me cherish this concert so much. The audience were on top form and were also in fine voice! Obviously, being in that sacred front central spot in front of Sting is an enormous luxury that never disappoints. The same place Lydia was located (in Lyon and Nice) and where Joelle was in Rouen, no surprise that front row centre was a hive of activity during all the concerts.

Although it always seems to rain when I’m in Lyon, it was the vibrancy of “Heavy Cloud” and the audience reaction to it that nails this as the best version I’ve heard on the whole tour. Sting does an extended “If I was to say Heavy Cloud”, really pumping up the crowd, knowing he will get some extra volume from me, (if required) the whole audience are behind the “No Rain!” reply and Sting is appreciative that I’m actually on cue. The crowd are very upbeat, good singing and in sync clapping reverberating around the venue. It is hard to fully describe that sensation; I think it was starting to dawn on the band how special this concert was turning out to be.

We had already had rousing versions of “Faith”, (with added bass chords, a bass sound I’ve nick named “dirty bass”); “Every Little thing” and “Englishman in New York” but for that thunderbolt of electricity and waves of energy from the crowd whether MIAB or Roxanne win the Gold award for rocking out?

The only thing I would change during MIAB would be to have more space around me during my moves and jumps during the most amazing rocking version of MIAB. It was really a truly amazing emotional, breath-taking version; Sting is beaming, smiles at us and gives us several nods of approval, the whole audience were singing their hearts out, all, sending out an S.O.S. superb. Sting has managed to persuade Dom into doing some big jumps at the end of songs as well.

No chance of us being lone voices in the numerous audience refrains, during the “Da Da Da” responses in “De Do Do Do” The end of the song resulting in a “wooo oooh” to and fro between the audience and Sting, leaving the crowd chanting loudly until the band launch into “Peter’s Solo” (as it is called on the Set-List) The following evening in Rouen, the crowd had the same enthusiasm, but not the good timing in the refrains, Dom could be seen putting his fingers in his ears (in a lovely comedy moment) as some of the crowd mash-up the responses similar to when a Dj mixes different beats together and it all goes a bit askew.

The instrumental jam of “Love is Stronger than Justice” keeps evolving during the tour and this version is different than those before, with a point about half way through where we an extended Vinnie drumming solo, and extended keyboard jams from David; as usual Peter was rocking out big time during his solos, huge reaction from the lively Bordeaux crowd.

Sting was also in a playful mood, this was highlighted brilliantly with “Roxanne” There is something about a French audience and this song, even after the concert had ended, the chorus of “Rooooxannne...” could be heard in different parts of the venue and in the dimly lit streets beyond.

Whilst in Lyon (on our second night there) and walking through an unfamiliar district we not only had a bit of a trek for the bus (after our night out) to get back to the hotel. But, we weren’t even; totally convinced we had found the correct bus stop. When I noticed a young woman (who I almost asked advice about the bus times) she seemed to know the area well, and I thought it was good of her to help a passing motorist with directions. (Who appeared to be lost?) It wasn’t until she got in the car (the high heeled boots should have been the real giveaway) that I knew something else was on the cards for the driver? My poor French language skills, saving me from a conversation with a real-life Roxanne!

Back to the version of the song, which was free flowing, with the most amazing key change mid-way through, Sting was changing the tempo, the musical signatures with ease, playfully challenging the audience to ever more adventurous high pitched refrains of Roxanno” the audience were more than capable of the task asked of them, smiles all around.

Both Roxanne and “Wrapped around your finger” showcase the wonderful lighting design of this tour to perfection, as does the sensational sound mix on “Hounds of Winter”, “Shape of my Heart” and “Fields of Gold” all sounded exquisite. I’ve heard subtle sounds and chord changes and guitar riff additions that Dom has added to keep the arrangements sounding fresh during the concert that I had not heard earlier in the year.

Throughout the whole concert Dom was breaking out into a beaming smile, and doing some crazy stances, and funny faces in our direction. We had a tremendous amount of attention from the entire band in Rouen particularly during “Demolition Man” and “Desert Rose”.

How I found the energy for the finale, a phrase I’ve been using all week (oooh my legs!) I don’t know? By the time of "Next to You", I had used up most of my energy, I was flagging. It was Interesting to note an addition of a member of the crew on stage dancing by Jo Lawry, with a big mascot on his head. We thought at one stage it might have been an Ice hockey Mascot, discarded in the corner of the dressing room (as the venue is usually an Ice ring). We thought this light hearted comedy moment, was a one night only for Bordeaux, but this Cuddly fellow made a return in Rouen. Jo was rocking out big time during the song with some fine dance moves and, as always shined on the vocals on the haunting “Hounds of Winter” earlier, with the crowd rapturous in their appreciation.

For me, the Bordeaux Concert will always hold special significance, the whole week hold fond memories that I’ve barely begun to scratch the surface of. I’m overheard saying “it doesn’t get better than this” by both the crew and fans close to the mixing desk as we make our way to the exit at the end of the show. A big warm thank you to all the crew and band, all of us, absolutely loved our time in France and look forward to the next one. (whenever it sets sail?)

Comments
2
You must be a logged-in member to add comments. Log In | Subscribe
November 12, 2012 posted by Lebret
Fantastic !
Lyon 11.09.12 Since the 1st French round in 1988, I am always also fan! 25 years after without a wrinkle, new arrangements, a brilliant concert! Quickly the next one!
November 08, 2012 posted by andreataccconi
my first concert
tomorrow will be my first concert of sting tanks of the music teacher I am an italian fan and came from italy (biella near tourin) 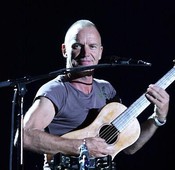