Jun
2
2012
Thackerville, OK, US
WinStar Casino
10
Share
Besides a few huge hits, the night was a snoozer...

Sting still has the ability to make women squeal at the sight of him, and they did that many times at WinStar World Casino on Saturday night for the first of his two-night concert. But he leaned on some of his lesser-known material, making for a show we wished was more upbeat.

Sting calmly walked on the stage without introduction. When he struck the first notes of the second tune of the evening, the well known Police hit 'Every Little Thing She Does Is Magic', every musician's nightmare became a reality for the seasoned recording artist: His mic went out and he had no idea. Fans booed, yelled for the soundboard to fix the issue, and even chanted ''we can’t hear,'' but Sting carried on throughout the song unaware that there were problems. It wasn't until the track was over and he was introducing the rest of the band members that the Englishman finally was informed that something was amiss. Politely holding his hand up to request five minutes to fix the sound problem, the fans cheered and eagerly awaited his return. When the issue was fixed, Sting played the song again.

The confusion was one of the most exciting parts of the show, which otherwise was filled with lesser-known tracks that moved fans to sit down. Because most of the seats are on the same level, it was hard to see the stage save for two screens showing close-ups of Sting. He also performed a few huge hits, but the majority of the evening was filler. Not even his country-inspired tunes, or his cover of Johnny Cash's 'I Hung My Head', could save the show. However, his fiddle player, Peter Tickell, awakened the audience with his impressive skills that, for a while, stole the spotlight from Sting.

Once the first encore came around, fans jumped to their feet from a foggy stupor to sing and dance to 'Desert Rose', 'King of Pain', 'Roxanne', and 'Every Breath You Take'. The second encore featured 'Next To You', which wasn't quite as exciting as his first encore but ended the evening well.

June 04, 2012 posted by bubbanosh
bubbanosh
I went to the opening show. the first thing is that the mixing board went down and the house audio was lost during the first number. Because of the power loss the presets were lost, so settings gained during the earlier audio-check were gone and the remainder of the set was spent mixing "on-the-fly". The second issue us that Winstar is a gaudy, smoke filled, money cow for the Chickasaw Indian Nation. The concert venue resembles a basketball arena with zero acoustics. I recognize that this show was the first in the tour... but I was very disappointed, and felt no perceived value for the over four-hundred dollars that the evening cost.
June 04, 2012 posted by bubbanosh
bubbanosh
Was at the opening show ... mixing board went down during opening number ... crowd was getting hostile (could not hear anything but distant stage monitors. Took about ten minutes to get things back up and running ... problem was that when the power went out everything defaulted to basic settings and all the "tweeking" from the earlier sound-check were lost. The first two thirds of the concert were used to "dial-in" all the microphones, audio presets, etc. It was awful! Second, Winstar is a vulgar,cheap, smoke filled cash cow for the Chickasaw Indian nation. The venue resembles a basketball arena with bleachers. The acoustics are next to none. I know this was the first date for the tour ... but I felt no perceived value for the over $400.00 the evening cost me. milo
June 04, 2012 posted by swtw63
Great Show !!!
Little problem with sound. Totally made up for it.Mixed it up with a little country.Place only held 3,000 so all seats great.Best part (ofcoarse) was meet and greet. Thanks to STING !! and all involved.... 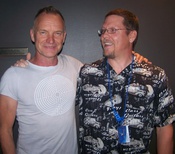 June 04, 2012 posted by sandyt
LOVED THE SHOW
My husband died after we purchased the tickets - I attended without him and was a wonderful event!!! Tell Sting how much the audience appreciated his performance and I especially enjoyed the event - some songs brought tears (remembering the times with husband) but mostly smiles and laughter!!!
May 21, 2012 posted by emilyanddawn88
YES
Cannot WAIT TO GO TO THIS!!!!!!! There's no way to describe how awesome this'll be.
April 03, 2012 posted by Nelson_oliva
Bring them to Grand Rapids
I couldn't go to the Bass Tour in Chicago or Detroit. I now they are coming back to US. Bring Sting to Grand Rapids MI !!!
Newer comments    1 - 10 of 10    Older comments