Remember what William Borsay, alias Willy DeVille (46) once said: ''It's all in the way you walk''. Then look at the body language of Gordon Sumner, alias Sting (48). The way he comes on stage Wednesday. Mind his pace. The melodious rhythm of it. Observe the resilient steps. They are the signs of inner peace and harmony. His right hand slightly touches a string, just for a brief moment. A tender gesture between old lovers. For whom a thousand words has been replaced by one single look a long time ago. The gentle look in his eyes, in which lies a veiled concentration and self-esteem. Behold the controlled swelling of his chest. Sting breathes in oxygen and breathes out music. Look at his lips. For two hours there hangs a sold-out Flanders Expo on them.

Because 'Brand New Day' - the tour even more than the (in the meantime golden) CD with the same name - shows Sting probably at the peak of his abilities. The recent 'A Thousand Years' rubs itself against the first solo hit 'If You Love Somebody Set Them Free'. In the new 'Perfect Love...Gone Wrong', drummer Manu Katché raps himself a way to the old 'We'll Be Together'. Trumpet-player Chriss Botti gets a sharp Mad About You going, Dominic Miller breaks open 'Fill Her Up'.

Because there is a lack of candles, lighters lighten up a sober 'Fields Of Gold'. The Io-Io of The Police swells in 'Everything She Does Is Magic'. And the intimacy of a club in the otherwise so cold concrete bunker of Flanders Expo even thickens in the jazzy 'Moon Over Bourbon Street' and the long-suffering 'Tomorrow We'll See'.

The choir that's the audience feels like it is an 'Englishman in New York' (Be yourself no matter what they say!) and doesn't know where to stay with its ecstasy during Roxanne, even less transparent than the already ambiguous original, what makes the song even stronger.

Is the encore usually the starting sign for leaving the hall, with Sting the audience retraces his steps twice. The first time for 'If I Ever Lose My Faith In You' and 'Every Breath You Take'. And, after a bit of insisting, for what is ultimately the main goal of every performing artist: the feeling of perfect unity that Sting awakens in a bare version of 'Message In A Bottle' and a masterly 'Fragile'.

Sting doesn't need a big bow to salute the audience. In his function of ex-Police-superintendent he briefly waves his limb of the law. He is the human sublimation of musical law.

Sting is cool again. A little while ago critics looked at the British pop star like he was a boring and preachy world improver, but thanks to his surprisingly good CD 'Brand New Day' he once again gets musical credit. During all those years Sting never lost his popularity with his fans: Wednesday Flanders Expo filled completely for a beautiful, but little surprising jukebox-concert.

Time and again Sting chooses live for the easy and predictable way: give the fans what they want for two hours and they will have a nice evening. On Wednesday it was not different in Flanders Expo. The Belgian concert was almost identical to the beginning of the 'Brand New Day' - tour in Lille and with a mix of greatest hits, Police-classics and new songs the pop smith disappointed nobody.

We still think it's a great pity that the British pop millionaire doesn't extend his adventurous approach of his latest album enough to the live concerts. We missed the raï-voice of Cheb Mami during 'Desert Rose' then when we listened to the jazzy improvisations we got the feeling that these so-called spontaneous musical escapades were rehearsed. Sting did go through the trouble of searching new arrangements for marvellous songs like 'Englishman in New York' and 'Moon Over Bourbon Street', but sadly enough the bombastic arrangements destroyed the simplicity of those wonderful songs. I preferred the funky raps of the masterly drummer Manu Katché during 'Perfect Love...Gone Wrong' or the catchy country gospel of 'Fill Her Up'.

It's likely though that the fans have amused themselves especially during Sting hits like 'If You Love Somebody Set Them Free', 'Fields of Gold' and the brittle encore 'Fragile'. It became a real party though when Sting browsed in the Police-archives and played 'Every Little Thing She Does Is Magic', 'Roxanne', 'Every Breath You Take and a magnificent acoustic 'Message In A Bottle'. Hands went in the air, everybody started to sing along and some people in their thirties even shook a leg. Is it perhaps time for a Police-reunion?

I have been a Sting fan since 1981 when he was still part of the greatest pop group in the world - The Police. It began for me with 'Every Little Thing She Does Is Magic'. But that's already 19 years ago. Sting's concert in Gent took place on the 15th March 2000. I took the day off because I wanted the best place. That means right next to the stage. I was there at about 6.15pm, and the concert started at 8.20pm.

Sting started the show with the beautiful song 'A Thousand Years', and it was very silent in the venue. 'If You Love Somebody Set Them Free' came next (it's still popular with the crowd). Followed by the turn of 'After The Rain' another great song, which was a perfect combination with 'We'll Be Together'.

Following this were 'Perfect Love Gone Wrong' (there was a French rap break in the song, it made the crown go wild), 'All This Time', 'Mad About You', 'Seven Days' (it's one of my wife's favourites), 'Fill Her Up', 'Fields Of Gold' (here was Dominic Miller at his best), 'Every Little Thing She Does Is Magic'. This song means something special to me. We all began to sing ''ee-o'' and people began to dance (including me!).

'Moon Over Bourbon Street' was perfect. It was very slow and a moon and several balloons went up on the stage (Chris Botti was wonderful, as he was the whole evening). 'Tomorrow We'll See' (this is a very jazzy song), and 'Englishman In New York' followed. I think it's the most popular song of Sting's solo career, everybody started to sing. This is also the most played Sting songs on Belgian radio.

Then came 'Brand New Day' and 'Roxanne', this was the song that everyone was waiting for. Everybody was singing ''Roxanna...Roxanna. 'Desert Rose' is one of my favourites of Sting's. I am crazy about this song. This is a perfect combination between western and Arabian music. I have already listened to this song hundreds of times on my CD player. Moving to the end of the show we still had 'If I Ever Lose My Faith In You', 'Every Breath You Take' (this is the single of singles, the greatest song Sting every wrote), 'Message In A Bottle' (Sting did this song solo) and another great song 'Fragile'. We think that it was a perfect concert. Sting is for me the greatest.


Shedding tears at the Sting concert in Flanders Expo...

Like many of his colleague pop stars, Sting got to do his thing in a sold out Flanders Expo. The thing that was different was his approach: instead of tuning his show to some sheep-like whining, it was the quality that was most important to him.

The fans had better have come in time Wednesday night, because Sting started his set ruthlessly early. It was only eight thirty when we had worked ourselves through a traffic jam on the E40 en at the box-offices, but the man was already playing the fourth song of the evening, 'Perfect Love Gone Wrong'. That wasn't too hard to understand: there was hardly any conversation in-between the songs, and Sting played his songs smoothly one after another like a professional deejay.

It was striking that Sting could alternately play songs from the past twenty years without getting into trouble. 'Tomorrow We'll See' got hooked on to 'Moon over Bourbon Street' as if there were musical twins, whereas in reality there lies fourteen years between both compositions. They were moments of glory for trumpet-player Chris Botti, who made the loneliness that is so characteristic for those songs awfully perceptible and at such moments a human being just has to start crying.

The fact that everything was flowing organically from one thing into another, was also to the credit of the band itself, because it clearly inspired Sting to play some older songs in fresh new arrangements. Let's take 'Every Little Thing Is Magic' for instance, at the time of The Police naughtily playful, now provided with more mature arrangements, it sure didn't sound worse.

But the most admirable thing was that Sting challenged the sold out Flanders Expo with quality. Where other pop stars tend to tune their repertoires for such big shows to a sheep like whining, he doesn't like to make it too easy for his audience. He brightened up his songs for instance with rather difficult jazz solo's on piano or trumpet.

On the other hand he didn't mind getting hits and old tricks out of the closet, for instance a solo version of 'Message In A Bottle'. The audience sang along to every letter with him, it was enchanting.

He ended the show as traditional, as heart-breaking, with 'Fragile'. For those of you who still have any doubts, I lipped the lyrics from the beginning to the end and at the same time I hated everyone else present. For let me be honest, you have to be quite out of your mind if you wanted to share a Sting concert like this one.

(c) De Standaard by Koen Depuydt/translated by Jurgen De Waegemaeker
Comments
0
You must be a logged-in member to add comments. Log In | Subscribe 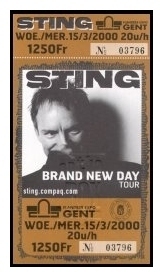