Sep
17
2009
Durham, GB
Winter's Night (Durham Cathedral)
Share
Here's the set list for the 17th (not in order) and a few thoughts.

Everything from the new album was played plus several other songs

In midset, Kathryn and Peter Tickell also performed three rousing Northumbrian songs on their fiddles but we're ashamed to say that we can't recall all their titles, although one was 'Team Spirit'. They got a great cheer though and deservedly so.

The whole show was one continual high spot, but if we had to pick highlights, then Soul Cake is the catchiest and most immediate track on the album. It will be used to help promote the album probably and you can hear why - come December this will surely be being played on radio 2 etc... But 'Christmas at Sea', a Robert Louis Stevenson poem set to music, with part gaelic singing from Mary Macmaster is stunning. It could have come straight from the Soul Cages album and is our favorite track on the album. Just stunning. (We told Sting how fantastic it would be to hear the Soul Cages given the classic album treatment by being performed in its entirety by this band, but he just laughed and said "Soul Cages, Oh get away..." Can't say we didn't try though.)

Other highspots - I saw Three Ships near the end was very rousing, nice to hear Ghost Story, Gabriel's Message with the blue spot shining straight through the cross on the central tower, the Coventry Carol with the 8 Durham Cathedral choristers, Lullaby with Dominic's false start (which meant we got two full versions including band introductions, and a bit of laugh as Sting joked about calling the song 'Lullaby to an Anxious Singer'), and the Cherry Tree Carol which Sting described as "Appalachian" and was a carol that was almost bluesy with Dominic playing bottleneck on his acoustic.

Nice to see so many new and old faces last night especially those that had travelled from Canada, the States, Japan and Australia to be there. Hope you all had a brilliant time. 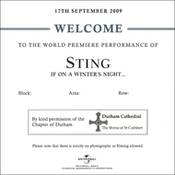