Judging from the reviews and forum chatter surrounding the opening weeks of the long-awaited and much-hyped Police reunion, the first 12 shows have been a mixed bag, at best. Even this critic, an admitted fan of the band who's been waiting more than 20 years for a reunion, walked out of their second show in Seattle (the fifth performance of the fledgling tour) shaking his head: While few could argue that the reunion itself was anything less than magic, the delivery sometimes felt like little more than a slight of hand.

Such was far from the case at the Honda Center in Anaheim Thursday night (6/21). On the second of the band's three sold-out performances in Southern California (Los Angeles dates included the Staples Center the night before and a Dodger Stadium extravaganza two nights later), The Police delivered a set that not only lived up to the promise of a reunion years in the making, but did so via performances indicative of musicians finally hitting their stride as a band.

The argument that they should have found their stride before the tour commenced May 28 is a valid one, especially when ticket prices exceed $250 for premium seats and $50 for nosebleed and obstructed view, but the difference the two weeks made between Seattle and Anaheim was nothing short of profound.

At the Honda Center, from the first notes of opener 'Message In A Bottle', through the rattling timbre of 'Synchronicity II' and into the bubbling bounce of 'Walking On The Moon', frontman/bassist Sting, guitarist Andy Summers and drummer/percussionist Stewart Copeland were firing on all cylinders. Even more impressive, they had all cylinders firing in line.

On a stage as stripped-down and minimalist as their music, they performed with cunning regard for their songs, despite an at-times staunch disregard for nostalgia. Clocking in at just under two hours, the 19-song set dissected the band's catalog, from the punk rock tenacity of closer 'Next To You', from their 1978 debut 'Outlandos d'Amour', to the adult-contemporary, Top 40 goliath that preceded it in the set, 'Every Breath You Take', from the band's fifth and final studio album five years later, 'Synchronicity'.

Just as the setlist has seen some modifications over the opening weeks ('Murder by Numbers' and 'Spirits in the Material World' have been trimmed as of late), so has the delivery, the band tightening their performance throughout. What started out as the Sting show, with Summers and Copeland merely along for the ride (in Seattle, the three often sounded as if they were in different vehicles altogether), has evolved into an Anaheim performance where the ghosts of their decades apart are finally appearing to work their way out of the machine.

Of note, Copeland dispensing a thick backbeat for Summers to sizzle over in 'Driven To Tears', the drummer painting a lush, Middle Eastern tapestry of percussion on 'Wrapped Around Your Finger', and the guitarist leaning into 'Can't Stand Losing You' and lighting a fire atop the song's easy going swagger. Sting, meanwhile, lived up to every bit of his iconic presence.

The tin strings and calypso rhythm of 'The Bed's Too Big Without You' and the toned-down delivery of 'The Truth Hits Everybody' were far from mid-set highlights (especially in the absence of more deserving nuggets from their catalog), 'Roxanne' unraveled in a bit of a jumble, and Sting's vocals showed signs of wear in encore opener 'King of Pain', but none overshadowed an otherwise formidable set.

The night's only ''heavier'' moment came in the form of hunger relief videos during 'Invisible Sun', which ironically followed the evenings lightest moment, Sting singing ''De, Do Do Do'', and the more than 19,000 in attendance singing ''De, Da Da Da'' back in unison. It was an exchange that suited many of the parents in attendance quite well.

Such was the dichotomy of The Police in Anaheim. With roots in punk rock and hits in the world of pop, this night offered a juxtaposition of both; what time may have taken away, maturity has reinterpreted. The songs sounded fresh and the delivery was honest, two of the hardest things to attain on a reunion of this stature.

Other than cheaper ticket prices, could we ask for anything more?


The Police in Anaheim...

Sting and Stewart Copeland have aged as well as most of the Police's back catalog; Andy Summers, not so much (he looked like a marathoner in his 25th mile by the third song). To my mild surprise, the trio, who have owned a sizable chunk of the radioscape since 1978, yet again have become a well-oiled hit machine a mere 21 years after their last concert together. The sold-out Honda Center crowd was, to paraphrase one especially touching Police ballad (which they played tonight), ''wrapped Around their finger.'' (Just because every live review will likely use this meme, doesn't mean it isn't true.) I doubt the cheers for the Ducks' Stanley Cup victory out-decibeled those heard for the Police tonight.

Striding onstage to the Wailers' 'Get Up, Stand Up', the Police slipped quickly into 'Message In A Bottle' after drummer Copeland's ceremonial gong hit. It almost seemed as if we were back in 1979, so smooth and natural did this version sound. Copeland's still a badass funky metronome on his large kit (which includes an array of hanging chimes, cymbals, kettles, xylophone and other exotic percussive ornaments) and bassist/vocalist Sting leapt during the song's climactic chord like a man 30 years his junior.

'Synchronicity II' followed, as lithe and full of adrenaline and intrigue as ever. Guitarist Summers tore off a fibrillating, whammy-barred solo, which he did often tonight. As Sting quipped later in 'So Lonely' during the first encore, ''Welcome to the Andy Summers Show.'' Winded though he looked, Summers seemed hell-bent on establishing his ax-hero credentials: it was charming or pathetic, depending on your view of gratuitous showboating.

Then came one of the Police's most endearing oddities, the eerie, spacious dub excursion 'Walking On The Moon'. Sting's voice is a bit lower and less limber than it used to be, but it's still pretty supple and robust. He often left lyrical gaps for the crowd to fill in with their massed voices, and this worked particularly well with ''Moon'''s ''ee-oh ee-oh''s.

When the band shifted into 'Voices in My Head', one of their funkiest, spookiest compositions, my spirits skyrocketed. They soon plummeted when the tune prematurely morphed into 'When the World Is Running Down, You Make the Best of What's Still Around'. Now, I'm all for messing with expectations and tweaking the canon, but the Police never let 'Voices' zoom like it needs to zoom. Still, when they accelerated the tempo for ''World'' and ventured into a spicy jazz-jam tangent, transgressions were forgiven. Similarly, the trio expanded their first hit, 'Roxanne', into an extended dub workout illumined by Sting's jazzier, scatty vocals.

On 'Don't Stand So Close to Me', Sting's phrasing was way more mellow on the chorus, deflating much of the album version's tension. This change just seemed wrong. But on 'Driven To Tears', everyone played with a savage vengeance, which seemed more right than ever, as today's world is, believe it or not, more fucked up than it was in 1980, when 'Tears' was released.

Over the 19-song, 110-minute, two-encore set, the Police hit most of the expected touchstones and a few slightly less-traveled pockets of their oeuvre (the Esperanto'd Eno-Byrne homage 'Walking in Your Footsteps', 'Truth Hits Everybody', 'The Bed's Too Big Without You'). In fact, masses commenced exodus after 'Every Breath You Take', the conventional-wisdom finale, but the Police shocked many by finishing with the amphetamine-fueled 'Next To You' off their debut LP. I applaud the group's decision to close a long set with one of their most energetic tracks, even if it meant having paramedics stage side keeping a close eye on Summers... 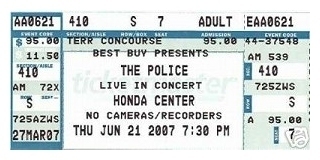