On his solo albums, the former Police leader is a portrait of suave reserve. Even when the music is jouncing around him, he seems less like a pop star making a record than a sultan arranging a banquet from the comfort of his divan. And when the strain of knocking out sophisticated hits gets to be too much, you just know there is a servant with a palm frond waiting to whoosh the sweat from this dignified brow.

But in concert, the perpetually youthful Sting is a whole different animal. He paces. He twitches. He lets the sweat fall where it may. And unlike many musicians of his sure-thing standing, he watches. Relaxed but hyper-alert, he looks beyond the footlights for signs of a victory he does not assume is his. His eyes dart and gleam as his brain calculates the odds. Is this working?, he wonders. Am I getting through? Are they officially mine?

Of course they were. From the beginning of Sunday's Copley Symphony Hall show, the sold-out crowd of more than 2,000 had pushover written all over it. But to his credit, Sting did not take advantage of the fans' swoony state. On the one hand, the show was impeccably conceived, expertly paced and beautifully executed. It was also passionate and very human. With the nimble support of his eight-member band, Sting charged through a two-hour show that could serve as a model for how to build a better rock concert.

After a lounge-ready set from reggae veterans Aswad, Sting got things off to a deceptively low-key start with A Thousand Years, a meditation on long-time love from his new release, 'Brand New Day'. Like the rest of the album, A Thousand Years is a pretty snooze, but the live version was a real stunner. Between Sting's husky, emotionally charged vocals and the band's spare, intuitive playing, the song built up a quiet momentum that bowled you over when you least expected it.

With the last notes of the new song still vibrating, the band plunged into a combustible version of 'If You Love Somebody Set Them Free', and the evening's savvy pattern was set. The band would be tight, but never constipated. The song selection would be smart, but not calculated. And fueled by his own ambition and love of a challenge, Sting would give his airy new tunes depth and bite, while making his old hits worthy of revisiting and reassessing.

It didn't always work. Until he got warmed up, Sting sounded strained, and the chances of hearing those trademark high notes seemed remote. And no matter how much energy he pumped into them, he couldn't jolt all the new songs out of their amorphous funk. 'After the Rain Has Fallen' has a clunky chorus, 'Perfect Love...Gone Wrong' is saddled with a silly man-in-the-doghouse theme. And while Sunday night's rendition was infinitely superior to the CD track, the twangy 'Fill Her Up' proves that while Sting is a man of many talents, writing country songs is not one of them.

But for every minor stumble, there was a gravity-defying leap or two. After admitting to a little trouble remembering its knotty lyrics, Sting skipped the light fantastic all over 'Seven Days', a feat that turned the already manic crowd into raving loons. And though he sounded winded early on, the breathiness didn't last.

Although it was intriguingly paired with 'Tomorrow We'll See', an empathetic new tune that answers the question, ''What if Roxanne had been a male transvestite?,'' the original 'Roxanne' sounded flabby. Sting and the band stretched the new-wave ditty into a crowd-pleasing jam, but the song wasn't really up to the challenge.

Other old favorites fared much better. Jason Robello's pummeling keyboards sparked a romp through the Police's 'When the World Is Running Down' that was so vibrant, Sting's hips looked as if they were about to shimmy out of their sockets. Longtime drummer Manu Katche didn't quite replicate Stewart Copeland's kinetic pace, but he kept the dizzy spirit of 'Every Little Thing She Does Is Magic' beautifully intact.

Sting could have settled for considerably less and still given the fans more than they asked for. His concerts might be shiny pop-perfection machines, but as a driver, Sting is never on auto-pilot. And by the end of the evening, the hall was littered with fans who knew exactly what hit them, and couldn't wait to get run down again.

(c) The San Diego Union-Tribune by Karla Peterson
Comments
0
You must be a logged-in member to add comments. Log In | Subscribe 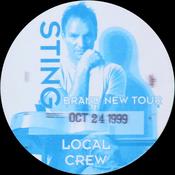