The day before the tear-gas and gunfire in Reggio Emilia, scary Cramps guitarist Bryan Gregory, a sinister stick insect in black leather, walks up to me outside the Hotel Principe E Savoia, which The Police have commandeered as their Milan HQ, puts his mouth to my ear and whispers with husky intimacy: ''Growl for me, Tiger.''

Words, frankly, fail me. I head at a brisk pace towards the coach for the Palalido sports centre, where The Police are playing tonight, supported by The Cramps. Bryan follows me onto the bus, sits next to me. ''Can I interest you,'' he asks, ''in a conversation about necromancy?''

Hours go by, and I guess at some point I nod off. Anyway, the next time I see Bryan he's onstage with The Cramps and 10,000 hysterical Police fans are jeering and throwing things at them.

An orange bounces off Lux Interior's forehead and The Cramp's singer dives into the crowd. Someone bits a chunk out of his shoulder, hands claw at his naked back. He's thrown back on stage, covered in blood. The audience want nothing to do with him. More fruit flies at the stage, splattering against the equipment.

''This is absolutely marvellous,'' Andy seethes. ''We pay a fucking fortune for the best PA we can assemble, hand it over to this shower and watch it reduced to ashes before we even get to use it. Fine, I've absolutely no problem with that.''

Lux, meanwhile, has gone down beneath a barrage of missiles.

''It's like the damned playing for the doomed,'' Sting says gloomily, turning away.

The next night, in Reggio Emilia, it gets worse.

The trouble starts in the afternoon. The Copeland brothers - Police drummer Stewart and manager Miles - are strolling through the streets around the Palasport stadium when they hear the sharp bark of orders, the ominous pounding of boot heels. Turning a corner, the Palasport is in front of them and they can't believe what they see. Thousands of fans have forced open fire doors along one side of the arena, pursued by a flying phalanx of riot police armed with batons and shields, who lay into the rioters with venom.

Meanwhile, Sting and I are standing by the side of the stage inside the Palasport. We're talking about Thomas Pynchon's 'Gravity's Rainbow', which Sting typically thinks only he's read, when there's a massive fucking bang and the plate glass doors at the back of the stadium just sort of explode, glass flying everywhere. Then the doors along the side of the stadium burst open, frames splintering and buckling. Hundreds of rock'n'roll shock troops stream into the cavernous hall, pursued by the baton-wielding riot police Stewart and Miles had seen charging through the town.

We retire to the band's dressing room, where the next thing we know we're all hitting the deck as a volley of gunfire blasts through the night.

We can hear screams, the sound of running feet, another bloody riot. And now we're all coughing like coal miners, tear gas pouring into the dressing room from the battleground outside, the whole gang of us fleeing the dressing room.

''This is what I really like about Italy,'' Andy Summers says, leaning against a wall, trying to catch his breath. ''They make you feel at home.''

''We'll get T-shirts made,'' Miles blusters. ''I SURVIVED THE BATTLE OF REGGIO EMILIA!''

Another tear-gas canister goes off inside the stadium, there's more gunfire from outside.

''Just remember,'' Miles grins, looking for the BBC film crew who are touring with The Police. ''This is all great for the movie.''

''I will remember that,'' Sting says, ''when they rush the stage and start tearing us to pieces.''

''Why are you so worried?'' Miles laughs.

''I'm worried,'' Sting says angrily, ''because I've got to go out there to face that mob, while you sit in here and count the money.''

Ten minutes later The Police are on stage and Sting is in an even greater strop.

He wipes the phlegm from his face.

''It's feeble,'' he announces. ''You spend all your energy rioting, and you've none left to dance. You people should get your priorities right.''

What follows is fraught, ugly, hysterical: the crowd charging the barriers at the front of the stage, bodies being passed unconscious over the barricades, fights breaking out with security men.

Sting comes off stage and kicks open the door of the band's dressing room.

''What the fuck was going on?'' he asks. What's the matter with these people? What the fuck are riot police doing at a gig?''

On the coach back to Milan, Sting is calmer.

''Sometimes I think this is the best job in the world,'' he tells me. ''It's certainly more exotic than teaching in Newcastle. But tonight, you know, it makes it all seem so worthless. I don't mind being jeered, as long as I'm not ignored. I don't mind what an audience does, but rioting - leave it out. I don't want to be the focus for a fucking riot. It's nonsense. It doesn't even make great headlines - except for him,'' he says with a hoarse laugh.

Miles has his Sony headset on - couldn't have heard but must have sensed someone talking about him. ''What's up now?'' he asks.

''Nothing,'' Sting says, walking to the back of the coach, where through the window you can see the moon hanging over the Alps. ''Nothing at all.''

(c) Uncut by Allan Jones
Comments
0
You must be a logged-in member to add comments. Log In | Subscribe 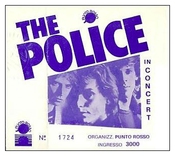