Everybody wants to see the Police. That's official. Anybody who might doubt that fact had only to be present at the Police's recent gig at London's Rainbow theatre. The exceptionally good (and brave) support act, Wazmo Nariz went down surprisingly well with the ever swelling ranks of Police fans. Having foolishly left my seat in the interval, I was forced to stand, sardine-like at the side of theatre for the remainder of the show, but I certainly wasn't the only one.

The minute the band bounded onstage, the audience leapt to their feet and everyone... and I mean everyone stayed that way. Dancing, singing, clapping, we swayed our way through the show. And what a show it turned out to be.

Sting, needless to say was the star of the show. Suffering from a bout of laryngitis he nevertheless gave magnificent renditions of all the numbers, highlights predictably being 'Can't Stand Losing You', 'Walking On The Moon', a stunning 'Roxanne' and a stupendous 'Message In A Bottle.' Also worth more than a mention were the moody 'Bring On The Night', and the excellent 'The Beds Too Big Without You', the latter which brought the house down.

They can do no wrong. There's just no stopping them now, and deservedly so. The only group of '79 can only get bigger and better in the eighties, and that's a formidable thought.

(c) Superpop by Donna Smith
Comments
0
You must be a logged-in member to add comments. Log In | Subscribe 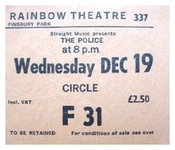