Wazmo Nariz wears two ties - but then so did Spilt Enz, and look what happened to them - and he's handicapped by a ''wacky'' image and a U.S. production campaign saying ''Be smart, Be Cool, Don't Buy It, Don't Play It, Don't Hear It''. So when he started his set, a lot of ''smart'' people weren't buying it. Which isn't surprising when you're playing support on teen heart-throb territory.

Wazmo and his band come across as mood music for fixing lampshades, despite an eccentric vocal style which is the weird sounds of ultimo art expression. Imagine Lene Lovich with a throat infection duetting with Pere Ubu in a state of nemesis extremis - well, uh, he may be wearing the face of an obscure future, but he does dance. On 'Luncheonette Lovers', Wazmo was doing something that looked like the Salamander's Promenade, but his heart wasn't in it and they wisely played a short set.

What else could refugees from the American Kitsch-palace do when hundreds were aching for the Regatta des Blondes? A thousand sighs welcomed the Police, who got on with 'Next To You' cleverly next to themselves in the form of a background slide show which was an offensive reminder of their golden moments on TOTP, now made flesh divine.

Naturally, the full house loved the early ace of 'Walking On The Moon' and, about a third of the way through, with 'Bring On The Night', the Police began to extend and elaborate. I liked the way they opened up the song, but they started to lean on it in 'The Bed's Too Big Without You' as the long middle section developed with treated guitars and space-age effects while Sting's voice echoed and re-echoed like he was in a superior tiled bathroom.

But they didn't do themselves any favours with 'Roxanne'. The dub-type spaces turned into yawning holes, and 'Roxanne' went down the drain along with Sting's voice - which is usually sharper than the average bread knife. Still, 'I Can't Stand Losing You'/'Reggatta de Blanc' covered the loss. The cool, clean sound that refreshes was almost sabotaged by the audience's shy and feeble contribution to the call-and-response piece, but 'Losing You' bounced back in a display of strength and fitness before orbiting around restlessly looking for a landing area for longer than necessary.

The encores brought out 'Born In The 50's', 'Message In A Bottle', and Sting's bare torso. (''Quick - a stretcher. Girls are fainting already.'') I was struggling into my biplane for the overview.

I love the Police for three minutes at a time. They make very peachy singles, but when they insist on riding the inter-galactic patrol with accompanying stretched atmospherics on song after song, the repetition comes to feel like ten minutes too much. They even played the slides through again. One of these days they're going to look at them and find that the Police of then have made the Police of now redundant.

How the tide turns...

How the tide turns. New bands and new fans came along faster than Concorde. Certain bands bring in an all-male audience and others bring the girls. Police have got the lot. Young kids that have come in on the hits, blonde hair and idol appeal. Older, more hardened rock fans after well-played rock music. Boys and girls alike.

At six o'clock they are already queuing to get in. Police t-shirts, badges and quite a few blonde haired look-alikes. How can anyone go wrong with that kind of following?

Inside, as soon as the lights dim, there's a great rush to the front, only to be followed by paranoid bouncers herding them back to their seats. One lunatic bouncer was knocking people off the back of their seats.

Police were having none of that, as soon as they told the bouncers to let them come, the rush to the front was on again. When the band have got the right ingredients it's not just them that's important to watch, it's the audience as well.

As soon as Sting, Andy Summers and Stewart Copeland appear and start to play, every word and syllable is repeated in synch by the mass that are with them. Perhaps they should have just stood there and let the audience do the work.

I' can't say much more, they played all their hits - 'Walking On The Moon', 'Can't Stand Losing You', 'Message In A Bottle', 'Roxanne' - and more and they all sounded like the records. Well played, well sung and very, very catchy.

What else can you say? You can't argue with the reaction they got.

Outside the sign on the front has changed from - 'Tonight, The Police' to 'Love At First Bite'. The person that changed the signs had obviously been in to see them.

The Police have set something adrift that's found thousands of recipients...

There's love here tonight: you can see it in the balcony where it spills out over the edge in all those thin arms stretched at the stage. It rises from the stalls as the audience dances, lurching and dipping, swaying and stumbling, hampered by the cinema seats.

This was best illustrated by 'The Bed's Too Big Without You': the bass bounces as it repeats its own argument, the quietly chatting drums interrupt the soft reasoned stokes of guitar; everything's saying the same thing in different rhythms and speeds and the song is so strong that when Sting sings ''without you'' as his voice stops the empty space in the air is filled with a silent scream from your own imagination.

Bass, guitar and drums coalesce, dissolve for a second into each other then each instrument slides away and circles the others, dissatisfied and mistrustful yet reluctantly, mutually, eternally attracted. Neither did I expect a delivery so powerful and sincere that the sound scythes straight to the back of the hall. The trap of the supergroup has been placed and set (you can see the signs in the fast succession of slides that flash colour pictures of those pretty Policemen on a huge screen at the beginning and end of the performance and in fact that 'Message In A Bottle' is saved for the obligatory second encore) but it hasn't yet snapped shut.

The Police are still free and for such seasoned professionals there's a strange disarming innocence about them. They take an innocent pleasure in their own performance; there's an innocent enjoyment in their ability to move a huge audience without manipulation; there's even innocence in Sting's happy, unconcerned acceptance of his own sensuality. And their performance does not rely on the standard, stagnant pattern of preconceived call and response or the laboured rabble rousings of preaching, hollow heroes. It's simple, joyous and spontaneous and it doesn't pretend to have implications greater than enjoyment of the immediate experience: The Police are rewarded by a response that isn't yet worship nor profane idolatry and is still based on friendship, respect and - generous warmth.

'Hole In My Life' sees thousands of arms shooting up in unison with Sting's as he shouts ''yeah''; 'Roxanne' has a tune that turns in the pit of your stomach and a rhythm that hits you in the hips; catches you in its current and insists you get moving; 'Born In The 50's' seems Sting's personal anthem and as he sings it the strong stream of his voice loses a little of its awesome control. During a long, loose 'Can't Stand Losing You' a small girl is suddenly onstage, standing quite still and watching quietly as Andy Summers turns towards her smiling.

That's there as well, the lost urge to touch, mentally and physically; a gentle yearning for a closer proximity that can perhaps be directly attributed to the fact that this has the largest preponderance of female attendance that I've yet seen at a concert.

Of the three components of the triangle, Sting is breathtakingly beautiful but does not belabour you with his looks. His pure, sharp, shining voice lances, splits, slices and impales the songs; his bass is the anchor around which everything floats and revolves. Andy Summers is smaller, introverted and anxious looking; his polite restrained, retiring guitar is infinitely effective and gives the sound it's soft colourful substance.

Stewart Copeland's drums are far more than mere background; they are assertive, integral and as he sits with long limbs flashing around the range of his percussion, he's only restrained from joining the two at the front by the physical demands of being behind a drum-kit.

I still don't quite understand the cause of my conversion but I know that The Police have set something adrift that's found thousands of recipients.

(c) New Musical Express by Lynn Hanna
Comments
0
You must be a logged-in member to add comments. Log In | Subscribe 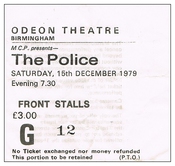 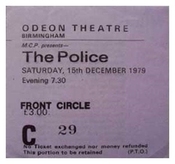