Police march into the '80s in grand style...

With the start of a new decade just three weeks away, The Police signalled in their show at Deesside Leisure Centre on Tuesday that they will remain a major force in the early Eighties.

Considering their debut LP, Outlandos d'Amour only began to stoke up the heat at the beginning of the year, their rise has been as swift as it has phenomenal. Four hit singles, two of them chart-topping, and two big-selling albums have undoubtedly made it their year.

The Deesside show may have been a little on the short side - just over an hour - but the energy put out by the band demonstrated a controlled power marked by a blistering opening four songs.

Two from Outalndos, Next To You and So Lonely, raised a rocking pace, and they brought it all down coolly with Walking On The Moon and the reggae-stabbing rhythms of Hole In My Life.

By the time the band's Illegal Records single. Fall Out, was being belted out, the faint-hearted were beginning to falter. Limp bodies were being passed over the heads of fans to the front, and the steam began to rise from a crowdd massed and pressing into the barriers at the front of the stage.

"If somone falls to the floor, pass them over your head to the front," Sting casually told the crowd. "But don't step on 'em," he pleaded more earnestly before the group launched into Bring On the Night.

Sting's strangled vocals. as ever, were a feature of The Police's set, and his presence was equally powerful live as it is on the records. If the man sang extracts from the dictionary he'd make it sound interesting.

I could have listened all night to him growling out a song like Roxanne, a perfect counter-balance between reggae and rock'n'roll which is a style The Police have made their own.

Their records sound refreshingly simple, yet the live show illustrated the subtle overdubbing of sounds they use so effectively on disc. Stewart Copeland drummed like a demon, and Andy Summers' textured guitar fills were solid, but some of the intricate work on the records was missing.

Message In A Bottle had the panting, chanting crowd of 5,000 fans singing out an SOS for an encore, Born in the Fifties provided a cracking closing shot, and The Police were gone all too soon. But they'll be back pleasing audiences for a long time to come. 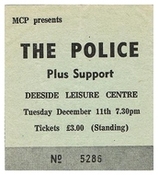