This was the last of the Police's two nights at the Hammy Odeon, and a fitting finale to their sell out UK tour.

The band bounded onstage to ecstatic whoops and cheers, the audience immediately surged towards the front of the stage. It was going to be a special night.

The only sign of fatigue after their rigorous string of dates was a pair of flashy sunglasses to hide an eye infection, and a touch of 'flu that made those top notes just that little bit difficult to reach, both afflictions courtesy of Sting.

But eyerything else was perfect. Polished and tight the Police have honed their live act to a fluid, immensely enjoyable set.

They have such a strong roster of songs that they can afford to play blockbusters like 'Message In A Bottle' and 'Roxanne' in the middle of their set and still build the pitch up towards the encore.

Even the new numbers were greeted with rapturous cheers, especially deservedly so on 'Walking On The Moon' and 'The Bed's Too Big Without You'. The latter produced the finest live dub session I've ever witnessed, proving again how essential Copeland's excellent drumming is to the band.

Three encores before the audience would let them go, finishing with the odd 'Be My Girl' - still a strong crowd favourite.

Now they're off to conquer America, the cheers from the Odeon still ringing in their ears. Let's hope it's not too long before they're back.

Sting's ain't what they used to be...

So the Police return triumphant to this country and play two nights at London's top venue. America loves them and London is determined to love them too. The seal of approval has been struck.

The audience is an accurate reflection of the band's across-the-board appeal. Last year's punk jostle with this year's mods and last decade's hippies. Cubby boys with their shirts off and eight pints tucked away inside their bulging bellies dance drunkenly in the aisles. Everyone is on his feet from the start of the set to the very end... and to anyone who supported the band from the early days this seems nothing less than justice.

But even Stewart Copeland, one times Sounds drum reviewer, couldn't have known, in his supreme confidence about the band's long term prospects, that the rise of bassist Sting as a film star and popular hero would coincide so fortuitously with America's embracing of The Police as The Acceptable Face Of The British New Wave, with its carbon copy implications for Britain. But these lads leant a long ago that if you've got it, you should flaunt it.

So Sting is very much the frontman, Copeland and guitarist Andy Summers very much the backing group tonight. Look at him out there basking in the glory, not to mention the three spotlights that track his every move lest we should miss a single twitch of his perfectly formed features. And the act is very much the same; only the shades have been changed to protect the innocent.

As a performing unit, The Police are almost immaculate. Not quite, not tonight anyway because a lot of the time Andy's guitar isn't as loud as it should be and the snare drum is too loud, the result being a distinct bias towards Sting's wailing vocals and the thrum-thrum of his bass guitar. But then perhaps that's intentional. Sting, after all, is the star. He gives us what we want.

''Eeooaa, eeooaa,eeooaa.'' You want tribal chants? We got plenty. They fill out the numbers nicely, see; bring a touch of style, a certain je ne sais quoi to that distinctive ethnic style (don't call it white reggae - people might be offended).

You want musicianship? We got plenty of that. Andy Summers' understated, almost lazy guitar work is as much an essential characteristic of the sound as Sting's powerful falsetto. Copeland's drumming draw heavily on the particular syncopations of reggae and exploits to the full the gadgetry and gimmickry with which a successful percussionist can surround himself these days.

But somehow, despite the set's blend of new material and golden oldies like 'Roxanne' and 'Can't Stand Losing You', both classics of the genre, I find I can't entirely dispel the impression that to a large extent, the band are simply going through the motions. Try as I might, I couldn't detect any real emotion behind tonight's performance. Perhaps it's all happened too fast for them and they're having to resort to a safe formula in order to cope.

I'd like to believe otherwise, because I'm as much a sucker for their comfortably universal appeal as the next man, but what am I supposed to think, when the biggest change I can detect since I witnessed their first appearance at CBGBs a year ago is that they're louder now and have a bigger lighting rig?

The Police are capable of a lot, but on the strength of this show, their spirit of adventure seems to be taking something of a backseat while their record sales do the driving down a rather safe and predictable path.

And here are some old ones...

In the wake of new wave and reggae saturation, it's ironic that a group who only dangle their feet in both should commercially outrun the groundbreakers The Police's, amost subversive stalking of the world's radios and hi-fi's suggests a powerful propaganda.

This is what they've had: as America wilted under the gall of Britain's parading punks they searched for a begrudging, token gesture of acceptance that wouldn't tickle the established sub-urbanity Stateside, The Cars materialised and Cheap Trick popped up and rolled their eyeballs invitingly, from unsophisticated, depressed Britain the AM commotions of Costello and clones were waved through customs. Sting's tail-enders walked through the red lane.

With the spotlight on, it was time to listen to the revolutionary new wave and cackle over its harmlessness Police-beat was thinly soulful, blanched and propelled by rhythrns that stumbled and shuffled rather than strutted. Sun kissed harmonies leaned lightly on the gristle of modified reggae syncopation and the whole was rounded and confident.

The mileage of The Police was measured; it stretched back across the Atlantic and beyond.

Three figures are awash under the lighting; they don't move much and amidst the visual calm Sting draws attention with composed authority. The Police are easy-going and ridiculously watchable.

Their music doesn't bow at any altars and merely winks at heritage. They alienate nobody as their appeal is diverted dead-centre. But they also touch on the frontiers of punk and reggae; therefore they round-up two camps and at that juncture they fill Hammersmith Odeon.

There they push the pop-song ethic where others prod it and expect it to jump forward. They tear along the dotted line and weld together California, JA and UK in a seamless flux. Their songs are obvious but rarely sound it, and the trick to their effective simplicity is concealed within. The trick is surely no trick at all.

Their command ensures that they name their own archetype and their name is suitably authoritarian. The Police sense of identity is fierce; contact between band and audience is therefore immediate. While broadening their horizons they enhance their accessibility and remain free from artifice.

Having discarded the harsher elements of reggae mechanics the result is an unselfconscious and adapted commerciality.

Choruses are replete with quicksilver acceleration and cumulative, irrepressible attack. 'Roxanne' and 'Can't Stand Losing You' become successful crowd-baters, but as such are stretched and torn apart while new material is surprisingly introspective, eerily romantic and lightly experimental. Their songs concern reactions of resigned desperation that appeal because, to various extents, they're widely mirrored.

They stumble where the gap between their stainless pop and self-parody almost touches knees. 'Born In The 50's' waves a cheaply nostalgic flag and the chorus is fashioned, overperfect and antiseptic: the product of effort rather than intuition and muscle.

But they regulate dreams and are regulation rebels that your mother might love. Again, it's the best of both worlds. They don't boast, their music is good-humoured, automatic and doesn't usually stretch for its perfection.

Sting's remarkable voice bobs airily on Andy Summer's strident guitar phrasing and contrasts cool soul with jagged strategy. It's this juxtaposition that's their edge, and their gliding between regulated extremes of style is shrewd but never cynical.

Later, after repeated encores drummer Stewart Copeland jogs off stage for the last time en route for breakfast in America; The Police skytrain is in motion and for the UK it's back to the specifics of airplay and vinyl.

Somewhere Sting adds a postscript: ''You can call it lack of confidence. '' He must be kidding.

(c) New Musical Express by Pete Archer
Comments
0
You must be a logged-in member to add comments. Log In | Subscribe 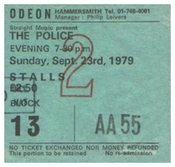