Depending on one's height or on whether one had never heard the identical sounding Police set before, this event could be regarded as anything from a miserable muddy disaster to a beta-plus success. For many of the crowd, who couldn't see the stage and doubtless suffered from claustrophobia at being jammed into a frighteningly over-full circus tent, it was a pretty miserable experience.

Standing on tiptoe and hoping the tent didn't get knocked over, it was occasionally possible to see Britain's most popular band of the moment do their bit for charity. Sting was wearing a schoolmaster's gown a tee-shirt to show off his excellent physique - a suitable combination for a former teacher who is now the nearest the rock business can offer as an old-fashioned heart-throb.

No question, he has an excellent voice and writes highly original pop singles. No question, either, that after nearly two decades in the business, Andy Summers plays fine guitar, using a battery of devices to make it sound more like a full and a distinctive sound, and the echoes and rhythmic breaks introduced into their rock ballads from dub and reggae were effectively handled.

But after only half an hour the mixture began to sound very repetitive, and the nearest the band came to a promised ''new direction'' was the introduction of a little straightforward RnR. ''De Do Do Do, De Da Da Da'' sang Sting, and a thousand half-crushed schoolgirls, eyed by many anxious parents bounced up and down to these intelligent sentiments. To stay on top next year, The Police have got to try a little harder.

(c) The Guardian by Robin Denselow

The Police at Tooting Bec Common...

Trust the Police, who pride themselves on doing things their way, to hold their pre-Christmas concerts not in any old suitable arena, but in a ''super-tent'' erected in a south London meadow. For the younger mums and dads (of whom there were many, chaperoning as if to a circus) it may have reawakened memories of the great pop festivals of a decade ago: the long, patient wait to gain admittance at the single entrance, the spartan facilities, the bonfire night spirit maintained against the mud and drizzle.

Once inside, the atmosphere proved worth the struggle, for within the big top was the warm informality of a dance hall. The sound quality was exceptionally sharp, and the visibility of the group, even for those too timid to join the crush in front of the stage, was certainly better than at the average 5,000 seater arena.

We were warmed up by Rico Rodriquez's magnificent ska-reggae band, by the chap who plays Citizen Smith on television (presumably a genuflexion to the Totting Popular Front), by fine boogie-woogie piano from Jools Holland, and by poor Tommy Cooper, who was heckled unmercifully by the juveniles, although the parents applauded with a rather desperate loyalty.

The Police, no mere peroxide moptops but a band whose chart success is built upon the firmer foundations of musicianship and experience, played as vigorously as usual and with rather more concision than they showed on the recent Rockpalast telecast. The dub-reggae improvisations and Sting's yodelling were kept to an acceptable minimum, and the set was a good example of the kind of textural variety which can be achieved by a rock trio with the aid of today's technology.

For how long the formula will stand repetition is another matter: a concentration on more thoughtful songs, like Sting's 'Driven to Tears', would be helpful. At the moment, they remain one of the few major groups whose message is wholly affirmative.

(c) The Times by Richard Williams
Comments
0
You must be a logged-in member to add comments. Log In | Subscribe 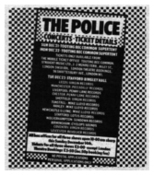 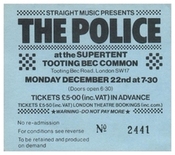