The Police gig was such a closely guarded secret that most of the 400 or so crowd didn't even know who was playing until shortly before the band went on stage.

It was basically a warm-up for their Wembley gigs and a thank-you to members of the fan club, who had paid £2 for the privilege. Altruism on the part of the group and manager Miles Copeland? At that price and for the ''real'' fans, I'd give them the benefit of the doubt.

''Ladeez and genulmen - we're very pleased to welcome back... The POLICE!'' Stage lights dim. Screaming girls (the like of which I've never ever heard before at the Marquee). A battery of flashlights. And three objects of idolatry are thrust into the spotlight.

They look relaxed (though Sting later comments he's more nervous about this gig than when they played Madison Square Garden), and after a slightly fluffed intro they're off to a good start with 'Message In A Bottle', 'Every Little Thing She Does Is Magic', and 'Spirits In The Material World'.

Disappointingly there are no new songs, surprises, or anything remotely experimental, apart from specific ''improvisations'' applied to a good half of the songs in the set, usually in the form of singalong chants designed to inspire audience participation.

But it's more than adequate show for even the casual observer like me only vaguely acquainted with their albums, all four of which were represented in their set... 'Shadows In The Rain', 'Invisible Sun', 'Drive To Tears', 'When The World Is Running Down', 'Demolition Man' and - to close - 'Can't Stand Losing You', 'Roxanne', 'Don't Stand So Close', 'Walking On The Moon' and 'Bed's Too Big Without You'.

The much-vaunted new horn section was somewhat low-key, used mainly to add touches of sax and trumpet to the newer material. The band genuinely seemed to be enjoying themselves. Swapping his Fender bass to upright for several numbers, Sting chatted easily to the ecstatic audience without patronisation.

It was a night to set the Police in perspective. Their appeal is tailor made for the casual as much as it is for the committed fan: simply take them at face value and you can't go wrong (as difficult as that may be in the void of Wembley). They're human, the music is warm and rigorous, and they create basic quality pop entertainment, no more no less.

If there was no Police, some other group would do it/be it. The only real alternative to hip/cool and plain unfashionable. because fashion really has nothing to do with it.

I have so many great memories of those heady days back in the late 1970's and early 1980's. I can't put into words how much I loved The Police, they were just something so special, so unique. I was lucky enough to see The Police 'live' many times. It's been a long time now but I'll never forget the excitement I always felt seeing the three of them on stage. The first time I ever went to a Police concert was on a freezing cold and snowy Saturday in December, 1981. I was only 14 years old!! I had got tickets to see The Police at their secret 'warm-up' gig in London preceding their British tour that month.

My friend and I struggled through the blizzard and across the ice to get from our homes to Coventry train station late that morning, ready to get a train to London for the gig that night. However when we arrived at Coventry station I was seriously worried that we weren't going to make it there because most of the trains were being cancelled due to the snow. Luckily, after a lengthy wait there was at last a train to London, but it was so full that we had to stand in the (very cold) luggage compartment for the 90 minute journey. I didn't mind - I knew I just HAD to get to London!!!

The gig was at The Marquee Club, and the room only held about 400 people. I was one of the first to get in, and rushed down to get a place standing right in front of the small stage (on the side where Sting's keyboard and microphone were set up). I could not believe my eyes when the band came on stage and launched into the first song. Was I really here, was it true that my heroes were here right in front of me? YES, it was. I was literally a few inches away from Sting! What a night that was, and what a gig!

In the years to come I was to see a lot more Police (and Sting) concerts, and hopefully more yet to come!! I managed to meet them, get autographs and some smashing photos, and every single memory means the world to me, but that very first time I saw them 'live' was very, very special. Thanks Sting, thanks Stewart and thanks Andy, for some wonderful memories...

(c) Jayne Hawkins for Outlandos/Sting.com
Comments
0
You must be a logged-in member to add comments. Log In | Subscribe 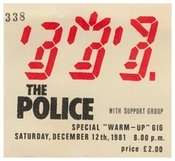