No wonder Sting wanted to announce last night: ''I've got some good news''.

This victorious home gig was the ideal setting to tell fans: ''I've just had a phone call from Los Angeles to tell me 'The Dream Of The Blue Turtles' has been nominated for six Grammy awards - I'm only telling you this because I want to read it in the Evening Chronicle.''

The concert itself was more than ample justification for those nominations for what are, in effect, the music industry's Oscars.

Wallsend-born Sting's apprehensions about returning to Tyneside for his first solo performance was quickly swept aside by a wave of warm, enthusiastic acclaim.

It was a case of hail the conquering hero and he responded in triumphant style, with barely a dull moment throughout his two hours and twenty minutes on stage.

Having shaken off the shackles of Police - whether that's permanent or temporary, no one knows - Sting has flourished as composer and performer. And it has taken him more into the realms of his old love, jazz.

Most of the audience probably went further down the road of jazz last night than they had ever gone. Certainly, I appreciated more of this musical form than I have since the heyday of keyboards maestros Jimmy Smith and Brother Jack McDuff many years ago.

Much of the explanation for this is Sting's shrewd choice of fellow musicians for both this tour and the album: saxophonist Branford Marsalis, keyboards player Kenny Kirkland, bassist Darryl Jones, drummer Omar Hakim and back-up singers Janice Pendarvis and Dolette McDonald.

Sting has something of the Midas touch.

In the late '70s, as punk flailed, he introduced to the charts a brand of reggae pop that - though it would be much imitated - was fresh if not unique.

That formula ran a little stale, who knows why, during the later period of his band, The Police.

But what he has achieved in his inaccurately entitled solo career is potentially more challenging than that music.

If the songs he wrote for his 'Blue Turtles' LP, with its six Grammy nominations, were good but not great, the Wallsend singer's Midas touch came in coaxing a band of jazz musicians into the rock forum.

That band appeared at the City Hall last night. It was the finest collection of musicians that the hall will welcome, I guess, for several years to come.

Sting himself, from the moment he walked on stage, appeared utterly relaxed.

Strumming a rhythm guitar for most of the performance, he launched his high pitched, slightly sandy vocals into the audience with confidence - occasionally a little down in the mix but most often strongly and clearly.

The band of black musicians he has brought together for his solo album sounded good on vinyl - on stage they were a revelation.

The family of Marsalis may be best known for trumpet prodigy Wynton, but Branford Marsalis, on saxophone, showed last night that rock musicians who grab that instrument are miles behind him.

Using soprano sax to delightful effect, particularly in 'Moon Over Bourbon Street', he showed an intuitive jazz feel of huge proportions that was a joy - and ararity - in what is normally a rock hall.

With Omar Hakim on drums showing a rock audience that feel is a word that can be applied to percussion, Kenny Kirkland on keyboards and Darryl Jones on bass and a brace of subtle black singers, the performance was a musicial banquet.

It was summed up by a version of a Last Exit song - the band Sting played in at the Gosforth Park and Newcastle Cooperage years ago - called 'I Burn For You'.

A fine number, it was transformed into a thrilling experience by extraordinary drums and bass solos.

Other highlights were a medley of 'One World Is Enough' and 'Love Is The Seventh Wave', a looser, more relaxed version of 'Bring On The Night' and a stunning rendition with acoustic guitar and sax on 'Roxanne'.

If Sting's vocals and enthusiasm held it all together, his real skill is not as a musician or even a songwriter.

His genius lies in unleashing new musical ideas. So far, with his clutch of jazz players, he has worked half a miracle.

(c) Newcastle Journal by Phil Murphy
Comments
0
You must be a logged-in member to add comments. Log In | Subscribe 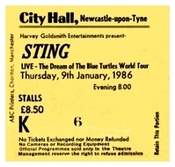