I was all for getting snotty about Sting's past, and his current pretensions. I wanted to grouse about the megastar menopause. You know, when our affluent lumps of beefsteak decide they want 'artistic integrity'. They want to write poetry, climb mountains and sail around the world. They want to do solo projects. They usually go on to make total jerks of themselves.

But hold on. Sting's no dope. He's got together a bunch of top jazz musicians, and a handful of decent songs. It was hard not to be impressed. The audience might have been full of teenyboppers and bank clerks, but we shouldn't blame him for that.

The set combined older songs with those from the Blue Turtles album, in a generously long show. The new ones came over well, actually benefiting from the rawer live edge. And given the calibre of Sting's musical sidekicks, it was pleasing to note an absence of ego problems. We certainly didn't have a drummer (who mentioned Stewart Copeland?) trying to upstage everyone else.

Police songs were surprisingly successful. 'Every Breath You Take' changed from a sinister, possessive song to an uplifting declaration of love. Another one to enjoy a servicing was 'Roxanne', with a simple arrangement of voice, acoustic guitar and sawn-off saxophone. 'Demolition Man' bombed, though; the jazz-trained band was too disciplined to 'get into' the sloppiness of rock and roll.Lowpoint of the evening was an indulgent work-out of the old blues chestnut, 'Need Your Love So Bad'.

Blues might be enjoyable to play, but it's boring as hell to listen to.

Encoring, the ever-cool Sting announced, ''This is a song I've never played live before'' (bet he says that every night), and so goes into 'Russians'. This song rhymes 'precedent' with 'president'!

Even so, you get the impression that the man was being sincere. A singalong version of 'Message in a Bottle' was a predictable, if not offensive, nightcap.

So it looks like he's pulled the whole project off rather well. The transition from pin-up to (semi) credible artist is only rarely achieved, but you have to give Sting some credit. Call it the acceptable face of adult-orientated music, or what you will... it really wasn't that bad.

The first show of a six night residency at London's Royal Albert Hall was notable for the sight of Stewart Copeland in the audience. Other music biz stars attending these London shows included Elton John, Billy Ocean and Pete Townsend.

Sting's looking good. He looks exercised and worked, - very hi-fibre and masssage-pariour. Sting? He's shaping up, He employs a tour masseur to relax him in the evenings. Nice touch.

And this is where I'd like to start with Sting, with the way people talk about him as if he was a racehorse - he's very bankable, a safe bet. Groomed, And I remember when girls would drag you along to see The Police and stand there gaping and say, just look at his nipples! The way he moves. Those little gestures. And that little knees-up jig he does which suggests earnestness, not trying to look cool.

And so-this is my point, at last - you're faced with a whole set of mental roadblocks when you set to thinking about Sting as a musical entity. His acting, for one. And, some people would say, his songwriting, But you should see him now. He's such a major-league charmer that he even makes the act of working his way through a thin song into some kind of drama. Watching him as he attacks and, in turn, is attacked by his one-man version of 'Roxanne' is a heart warming experience. Sting can't lose. Again, nice touch.

And another thing: there's a certain softness, a gentle pastel delicacy which surrounds him.

There's a veritable creche of babytime images here: everything from the fine, slightly mussed-up baby-hair to the baggy, cotton gear and all that ee-o ee-o singing, which goes very well with his song sentiments and the ingenuous lyrical stance: ''don't the Russians love their children too.''

So it's a pity that we got stuck in the snow. Great story: walked into the throbbing Apollo, looked up and Sting said 'Thank you and goodnight'. So I'll have to tell you about the encores. I'll have to tell you about 35 minutes of Sting pushing himself forward into his songs with more grinning self-belief and less wacko frenzy than I've seen before. There's a great - here I'm stuck for a phrase 'economy of mincing', I suppose. Whereas you feel that Paul King is pure poncing around (Toyah is the ultimate example here, I think) wall-to-wall froth with nothing underneath, Sting just jigs about and raises the occasional eyebrow.

That band, as it turns out, is mighty. There's a jazzy feel to the keyboard (Kenny Kirkland) and sax (Branford Marsalis) arrangements which means, in terms of rock, that they're prepared to diddle about and slide out of line a bit. But the drums (Omar Hakim) are really crisp, so it elevates the sound onto a rhythm-platform in the manner of 'Don't You Forget About Me'.

'Roxanne' is, like I said, a cathartic experience under these circumstances; a short, gladiatorial struggle between man and material, the perfect opener. 'Every Breath You Take' - a jealous man's pained self-indictment - is so stunning that we just gape. There's a solid 'Need Your Love So Bad', a sickly 'Russians' - a Christmas carol, a direct rip from 'God Rest Ye Merry Gentlemen', it is and it's such a jumble. An emotional tumble dryer. All human life is here, and soon.

(c) New Musical Express by William Leith
Comments
0
You must be a logged-in member to add comments. Log In | Subscribe 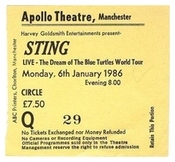