Sting can write his own musical ticket. He proved it last night during a solo concert at Radio City Music Hall.

Stepping away from the Police line-up, the trio that he fronts as lead vocalist and bassist, Sting opened a seven-night, sold-out stand at the Music Hall. (He'll be there again tonight, tomorrow, and, after a one-day break, for four consecutive nights...). The 2? hour show was a musical tour de force, successfully mixing rock, reggae, rhythm-and-blues, and a healthy dose of jazz. It also blended Police songs with tunes from Sting's best-selling solo album, The 'Dream of the Blue Turtles'.

The first several songs of the concert, with their heavily jazz-influenced arrangements, were the perfect showcase for the talents of the excellent musicians that Sting, who played guitar for most of the show, has surrounded himself with.

Saxophonist Branford Marsalis, brother of jazz and classical trumpeter Wynton Marsalis, nicely punctuated 'Shadows in the Rain', the show's opener, and 'Driven to Tears', while bassist Darryl Jones, drummer Omar Hakim, and Kenny Kirkland on keyboards contributed mightily to the seductive beat of 'Consider Me Gone'. Leaving jazz for a bit of reggae, the reedy-voiced Sting began 'One World Is Enough' with an a cappella introduction before being joined by the rest of the band and backing vocalists Dollette McDonald and Janice Pendarvis.

After several rousing choruses, Sting and company segued into 'Love Is the Seventh Wave'. With Sting and the backup singers trading lines from each song, the effect was spine-tingling. The combining of songs worked just as well with 'Bring On the Night' and 'When the World Is Running Down'.

In addition to allowing Sting and company to demonstrate their rock sensibilities, the up-tempo numbers permitted them to exhibit some fancy footwork. While Sting allowed the band members their time in the spotlight, with many instrumental passages turned into full-blown jam sessions, his presence came strongly to the forefront midway through the show.

The moody 'Moon Over Bourbon Street', a song Sting described as being about a vampire ''with a conscience'', was given a dramatic reading by the 33-year-old singer. Clad in a black T-shirt and loose-fitting suit, he seemed to take on the persona of the vampire as he sang over the soft instrumentation.

His gutsy rendition of the mid-tempo ballad, 'If You Love Somebody Set Them Free', was no less arresting.

As good as the entire show was, it was in the three encores that Sting really showcased his virtuosity. With just Marsalis providing musical support, Sting tenderly sang 'Roxanne' before switching gears, and getting the band together, for some gritty blues and a full-bodied rendition of 'Every Breath You Take'. Sting then went solo, concluding the show with a gentle but moving 'Message in a Bottle'.

(c) The Bergen Record by Barbara Jaeger
Comments
0
You must be a logged-in member to add comments. Log In | Subscribe 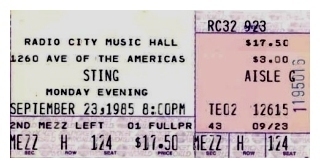