Song For Freedom - Music and politics came together for the Mandela birthday concert at Wembley Stadium in a remarkable triumph for Artists Against Apartheid...

Harry Belafonte made the inevitable comparison in the very first moments of the show. "This", he announced, "is the most spectacular rock concert since Live Aid." Eleven hours later, as fireworks exploded over the Wembley crowd and televisions and videos were turned off at last all round the world, it seemed that even more had been achieved.

Live Aid, and the subsequent Amnesty shows in the USA, had an impact on musicians and pop music, just as much as their audiences, by bringing them together in an atmosphere that led to new musical collaborations, as between Lou Reed and Ruben Blades. The Mandela show went even further, inspiring some remarkable and unexpected partnerships. The moment when the African stars, Salif Keita and Youssou N'Dour walked on stage with the great Jamaican rhythm team of Sly and Robbie, along with Aswad and Jackson Browne, it was clear that this was a very special musical event, not just a line-up of great talent.

What this show achieved was a difficult mix between the Live Aid approach and a very British multi-cultural tradition that started back in the days of Rock Against Racism and has been continued by Artists Against Apartheid. Two years ago, Jerry Dammers and his friends put on a free show on a hot day on Clapham Common, drawing major stars like Sting and Peter Gabriel, as well as reggae acts, to the best pop political event I've seen. Now, they were risking staging a show like that for a vast audience and had to face the gloom of a cold day at Wembley.

And it actually worked, thanks to a remarkable line-up, some surprisingly slick staging, stirring work from host, Lenny Henry, and a clever use of the assembled talent. The show started and ended with artists guaranteed to delight a Wembley (and world-wide) crowd and the more experimental packages were slotted between them, with soloists, dancers, comedians or exponents of more global styles appearing on a second stage during the change-over periods.

The first song of the day was Sting's 'Set Them Free', at the start of an impressive and powerful set that was difficult for George Michael to follow. He chose to pay tribute to some of his favourite black singers and sounded a little weak, either because he has been having trouble with his voice or because the smouldering sensuality of Marvin Gaye's 'Sexual Healing' doesn't really work too well before lunch. The Eurythmics were rousing and reliable, as expected, as were the famous names who came towards the end of the show. Whitney Houston broke away from her hits to duet on a Gospel piece with her distinguished mum, and Dire straits came back from retirement to run through their greatest hits with ease and power.

All of which was tremendous but nothing really new for a blase post-Live Aid music world. What was new and daring was the idea of assembling the special packages that filled the middle of the show and it was encouraging that the crowd had wide enough taste to appreciate all that was being offered.

Along with that Afro-Caribbean-American set by the Sly and Robbie posse, there was a stirring soul set which included Freddie Jackson in the sharpest suit of the day, a dapper Joe Cocker, Ashford and Simpson, Natalie Cole and Al Green, hitting the highest note of the event at the end of a rousing work out on 'Your Love Keeps Lifting Me Higher'.

Over on the smaller stage, the range was even more varied and brave for a massive stadium event. Tracey Chapman played thoughtful songs to a solo guitar as if she were in a Sixties coffee-bar; the glorious veteran vocal team of Mahlathini and the Mohetella Queens, who've been perfecting their township jive harmonies and nifty dance-steps since the Sixties, pretended they were at a Soweto party; from the US, the enormous Fat Boys turned out with Chubby Checker for a hilarious high camp rap version of The Twist.

Everyone performing was faced with one problem: how to convey birthday greetings to the world's best-known political prisoner while entertaining a world-wide audience. Stevie Wonder would doubtless have sung his Martin Luther King song 'Happy Birthday', (which had already been performed by the Eurythmics), if the theft of his computer hadn't stopped him performing his full set. As it was, he made a short and effective speech and changed the words to 'I Just Called To Say I Love You'. Whitney Houston dedicated 'Where Do Broken Hearts Go?' to Mandela, which seemed a little incongruous, and the best batch of Mandela songs came in the set by Simple Minds that was as powerful as U2 at Live Aid.

They ended by bringing on special guests for the trio of songs that have been pop's main contribution to the anti-apartheid movement. Peter Gabriel stood motionless for a sturdy and moving 'Biko', before Little Steven came on to lead a cast that now included Jackson Browne and Meatloaf through his boycott chant, 'Sun City'.

Then they were joined by Jerry Dammers, sneaking on stage to lead them through his 'Free Nelson Mandela'. Whitney Houston and Dire Straits had yet to appear but this was really the climax of a day to remember.

(c) The Guardian by Robin Denselow
Comments
0
You must be a logged-in member to add comments. Log In | Subscribe 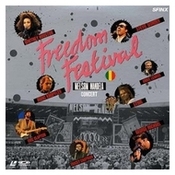