Mar
28
1988
Seattle, WA, US
Seattle Civic Center
Share
Ring-a-ding Sting - English rocker's how could do with a little more substance and a little less style...

Sting is one of the most gifted, talented and intelligent rock stars. But he doesn't always trust this intelligence. The sophisticated English rocker admits to making calculated career moves, such as writing thin pop songs he knows will sell and shamelessly trading on his good looks. But you can usually overlook such excesses because he's a growing, challenging figure who has written a lot of good songs, on his own and with the Police.

Last night at the Coliseum, however, he went too far. Although the 2? hour show had some good moments - especially the Police songs and a rousing cover of Jimi Hendrix' 'Little Wing' - overall it was too cool and smug, like something you'd get from Frank Sinatra or some other show-biz legend. Worse yet, the concert sometimes resorted to gimmicks and pandering.

Sting is too good an artist to have to resort to tricks. There is no need for him to do cute dances, shake his behind at the crowd like Tom Jones in Las Vegas, try to goose the girl back-up singer or play to the TV camera (the show was projected onto a big screen above the stage). His show does not have to have sing-alongs or bright lights shined onto the audience - the most offensive new rock-show gimmick - or fake endings designed to milk applause.

And he doesn't have to take his shirt off (of course it got the desired response - screams of delight from women). All Sting needs to do is sing his songs and be real. And that's all his fans expect of him.

The few times that he straightforwardly delivered a song last night were among the most enjoyable parts of the show, such as the brooding, enigmatic 'Fortress Around Your Heart' and the moving song about the mothers of the missing persons in Chile 'They Dance Alone' (which included a sobering film of some of the women as they joined Sting on stage recently in Buenos Aires).

The Police songs got the most response from the capacity audience - the crowd lustily sang along on every one, from 'Bring On The Night'/'When The World Is Running Down' to 'King Of Pain'. 'Don't Stand So Close To Me', and 'Message In A Bottle'.

Of the songs he has written since going solo, among the best last night were 'Sister Moon' and 'Be Still My Beating Heart', because both were oases of calm, with slow, jazzy music and fine singing, and 'If You Love Somebody Set Them Free', because it's such a good love song.

The Hendrix bit was the centrepiece of the show, with lots of action by Sting and his seven-piece band. The long, outstanding guitar solo by Jeff Campbell was a show-stopper, although the 'Star Spangled Banner' ending, ala Jimi Hendrix at Woodstock, was predictable.

Sting started the song with a riff from Hendrix's 'Voodoo Chile', played on acoustic guitar. The song featured his most sensitive singing of the night. He added a quote from the Beatles' 'From Me To You' to the lyrics and it worked perfectly. It would have been nice if he had said something about this being Hendrix's hometown.

Of the other band members, Branford Marsalis was outstanding, as usual, on sax - although he looked uncomfortable in some of the dance stretches, especially the twist. Keyboardist Kenny Kirkland was funky and eclectic, weaving soul, jazz and blues licks into his fine playing. The percussion work of Minu Cinelu was excellent throughout, but especially on 'Fragile', a chilling song about terrorism, which he and Sting performed as a duo. The band also included female bassist Tracy Wormworth (formerly of the Waitresses), keyboardist Delmar Brown and a new drummer Jean-Paul Ceccarelli.

A couple of TV cameramen seemed like band members, because they roamed the stage at will and were as a much a presence as the musicians. TV cameras have become a regular part of such shows, but seldom has an artists allowed them to invade the stage so brazenly. It made for some tight close-ups - you could see Sting's pupils, his fingernails as they plucked the guitar strings and even the brand name inside the hole of his acoustic guitar (it was a Gibson, Chet Atkins model).

The TV system was a snazzy one, with lots of visual effects such as slowing and freezing images, breaking up the picture, dividing the screen into four parts and altering the colour. But who cares? You don't go to a rock concert to watch TV, you go to hear music. The projection system should be secondary, not the star of the show. It was another disappointment in a disappointing night.

No fans were loitering on the concourse or hanging out at the souvenir tables during Sting's concert last night at the Coliseum.

Nobody wanted to miss this concert, a powerful, three-hour showcase of songs from Sting's two recent solo albums, 'The Dream Of The Blue Turtles' and 'Nothing Like The Sun'.

With the help of a strong, star-studded band that included saxophonist Branford Marsalis, percussionist Mino Cinelu and keyboardist Delmar Brown, Sting took the capacity crowd on a musical adventure through the familiar and not-so-familiar landscapes of contemporary pop, rock'n'roll, jazz, reggae and Brazilian samba.

From a purely pop perspective the concert was a great success.

Though his recent musical experiments have been called pretentious by serious jazz fans, Sting is leading his primarily rock-orientated audience in interesting new directions. Who knows where this may lead in future.

Last night it led to a great time.

Here was an audience consisting primarily of high school and college-age fans - with as number of older fans who have followed Sting since his early days with The Police - celebrating a fusion of musical styles rarely heard in today's concert arena.

When Sting took the stage shortly after 8pm, the audience greeted him with an explosive ovation and stayed on its feet through the entire show, which was divided into two separate but similar sets. Most of the show focused on songs from his most recent album '...Nothing Like The Sun'.

Adding a dramatic touch was a giant video screen that captured each exciting moment, including a playful pat on the rump he gave his female vocalist (it was oddly inappropriate considering Sting's socially conscious lyrics). Slow motion and freeze-action effects made the show look like a live MTV video.

The show opened with 'Lazarus Heart', a poetic tune dedicated to his mother, who died while he was working on the album. It was a moving piece, sharply punctuated by the spirited work of his eight-piece group.

'Englishman In New York', a song about author Quentin Crisp, a courageous and flamboyant homosexual whom Sting regards as a heroic figure, including exciting work by Marsalis, who nevertheless employed only a fraction of his talent during the show.

The generous selection of songs included 'Rock Steady', 'Straight To My Heart' and 'If You Love Somebody Set Them Free', his most successful song from 'The Dream Of The Blue Turtles'.

At one point, Sting poked fun at fallen TV evangelist Jimmy Swaggart, who once claimed a Police tune had been written by the devil.

Throughout the concert, Sting was very much in control. He also conveyed a good deal more warmth than he is known for. He appears to be enjoying himself these days, very much satisfied with the freedom his recent musicial experiments have afforded him.

The concert concluded at about 11pm with such songs as 'Message In A Bottle' (he skipped 'Roxanne', one of his former group's biggest hits). A lesser musician would have done half as much, leaving the rest to an opening act. 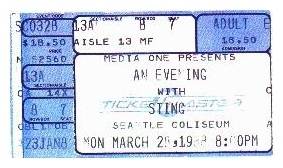